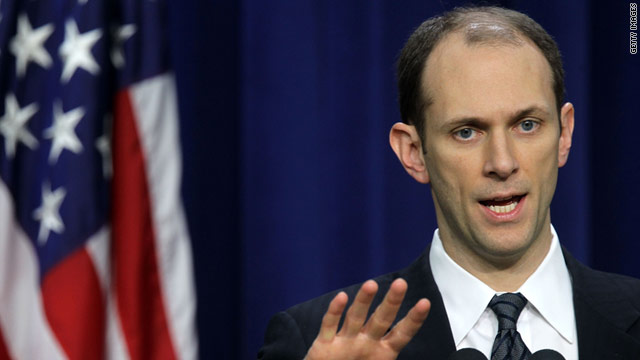 Austan Goolsbee has been an outspoken defender of President Obama's policies as the U.S. economy struggles.
STORY HIGHLIGHTS

Goolsbee has been an outspoken defender of Obama's policies as the U.S. economy struggles to find its footing following the steep recession of 2007-09.

In a statement announcing Goolsbee's departure, Obama called him "a close friend" and "one of America's great economic thinkers."

"Over the past several years, he has helped steer our country out of the worst economic crisis since the Great Depression," Obama said. "And although there is still much work ahead, his insights and counsel have helped lead us toward an economy that is growing and creating millions of jobs."

The announcement came after a series of reports that showed the U.S. economy struggling to maintain headway after the housing bust, banking crisis and recession. Sunday, Goolsbee told CNN's "State of the Union" that despite disappointing employment, manufacturing and housing price figures, the long-term trends remain positive.

Goolsbee on jobs: 1 month is not a trend

Goolsbee taught at the University of Chicago for 14 years before joining the administration and will return to the school in time for the fall semester, the White House said.

Before being named chairman of the advisory council in September, he served as a senior adviser to Obama's Council on Jobs and Competitiveness and as staff economist for the Economic Recovery Advisory Board.

"There's no question as you come out of the worst downturn in most of our lifetimes, that it is going to be fragile," Goolsbee said. But he said the economy was "a million miles" from its condition when Obama took office, "when the economy's losing 780,000 jobs a month and people are actively talking about will there be an end to the financial system in the United States."