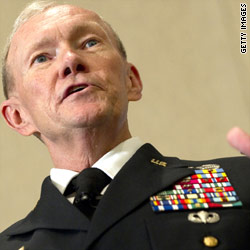 Washington (CNN) -- President Barack Obama on Monday nominated Gen. Martin Dempsey, the relatively new Army chief of staff, to be the next chairman of the Joint Chiefs of Staff.

Obama also nominated Adm. James Winnefeld, the current head of the U.S. Northern Command, to serve as vice chairman. He tapped Gen. Ray Odierno to replace Dempsey as the Army's chief of staff.

The president, speaking at the White House, urged the Senate to confirm the three men "as swiftly as possible" in order to help ensure a "seamless" Pentagon transition.

Who is Gen. Martin Dempsey?

Obama praised Dempsey as one of the country's most "respected and combat-tested generals."

"I expect him to push all our forces to keep adapting and innovating," Obama said. "We will provide what it takes to achieve our objectives in the current fight."

The selection of Dempsey is unusual partly because he took over as head of the Army only on April 11. In that brief period of time, Dempsey has earned strong praise for what is considered to be his outgoing personality. Among other things, the general receives a list of soldiers both in the United States and overseas every week and calls them to get their direct opinions on life in the Army.

He spent last Friday in Washington meeting with children who have lost parents and other relatives in war-time military service.

He has also gained attention for his long-standing habit of beginning some of his public speaking events by singing songs such as "New York, New York." On his Facebook page he recently asked troops to offer their suggestions for music he could play at events where he is speaking.

Dempsey's sense of humor has opened him up for some ribbing as well, like at the ceremony when he took command of the Army.

Gen. James Cartwright, a four-star Marine who currently is vice chairman of the Joint Chiefs, had been the perceived front runner to replace Mullen. But in a 30-minute meeting with Obama before the president left for his recent trip to Europe, Cartwright was told he would not get the job, according to a Defense Department official with direct knowledge of the meeting.

The official also noted that neither Gates nor Mullen had recommended Cartwright for the job as chairman, which meant his nomination by the White House would have been difficult to justify to Congress.

Cartwright had also been the subject of an investigation by the department's inspector general over whistleblower allegations of improper conduct with a junior female officer who fell asleep intoxicated in his hotel room during a business trip. He was cleared of wrongdoing by Navy Secretary Ray Mabus, but the official said Cartwright felt he was the still the subject of a "whispering campaign" after that.

CNN's Alan Silverleib and Josh Levs contributed to this report.