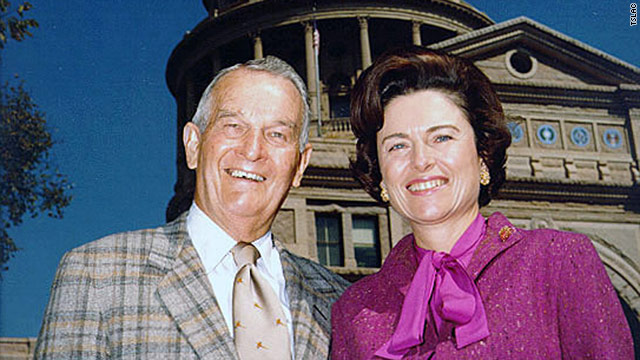 William Clements with his wife, Rita, in 1975. He was elected governor of Texas in 1978, marking a comeback for the GOP there.
STORY HIGHLIGHTS
RELATED TOPICS

(CNN) -- William Clements, the first Republican governor of Texas since Reconstruction, died Sunday at the age of 94.

Two of his successors in Austin -- George W. Bush and Rick Perry -- were among those expressing sympathy at the Dallas native's death, with the former president calling him "a great man."

"He was a political pioneer who served Texas and our country with distinction," Bush said in a statement. "Most of all, he was a friend who will be missed."

An oil-field roughneck before attending college, Clements first made his name and fortune as a co-founder of SEDCO, the world's largest offshore drilling company, according to his biography on the Texas State Library's website. He then served as a deputy U.S. secretary of defense under presidents Richard Nixon and Gerald Ford.

He scored a surprise victory in 1978 to become Texas governor. Still, his time was short-lived as voters ousted him four years later in favor of Mark White.

Perry, the Lone Star State's current governor, remembered Clements as a "larger-than-life entrepreneur, public servant ... a mentor (and) the father of the modern-day Texas Republican party." He ordered flags throughout the state lowered to half-staff in Clements' honor.

"Gov. Clements is responsible for the growth, success and election of Texas Republicans in every corner of our state," Perry said. "Today, Texans and Americans have lost a leader whose leadership, service and patriotism were unparalleled."