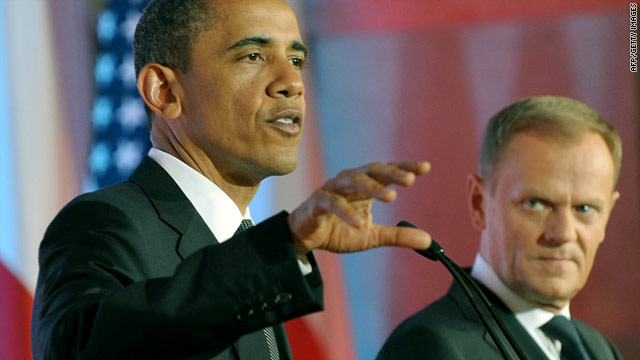 Warsaw, Poland (CNN) -- President Barack Obama on Saturday held up Poland's transition to democracy in the 1980s as a model for nations today pushing back against their governments -- from countries in North Africa and the Middle East to some in Eastern Europe.

In remarks with his Polish counterpart and member's of Poland's Solidarity movement, Obama said, "Your actions charted a course for freedom that inspired many on this continent and beyond. And it has many relevant lessons, so we want to encourage all states undergoing similar experiences to learn from Poland."

Obama thanked Poland for its contributions to Tunisia, which saw the ouster of its leader this year, and for sending its foreign minister to the Libyan opposition stronghold of Benghazi as rebels fight the forces of strongman Moammar Gadhafi.

The president also pointed to Poland as an example for neighboring Belarus, which has seen an authoritarian crackdown since December.

Poland, which was one of the first countries to recognize Belarus, has seen its diplomatic relations strained over the crackdown.

Poland has been a leader in pushing for sanctions against certain members of the Belarusian government, and the United States has discussed the same.

On Saturday, Obama said that there is an "unacceptable situation" in Belarus.

His remarks came in a speech in Warsaw with Polish Prime Minister Donald Tusk.

Obama said that the president of Belarus, Alexander Lukashenko, has "a total disregard for democratic values and rule of law."

Lukashenko, once called "the last dictator in Europe" by a U.S. official, was re-elected last year in a contest that triggered massive protests and led to hundreds of arrests.

More recently, press freedom groups lashed out at a Belarusian court for the two-year suspended jail sentence of a reporter accused of "organizing and preparing a public order disruption" in connection with the protests surrounding the election.

Pressure must be applied to Belarus to get it to change its practices, Obama said, adding that he was familiar with the case of journalist Irina Khalip.

The situation in Belarus was among the issues that Obama discussed with Tusk Saturday.

Obama called Poland one of America's strongest allies, and reaffirmed the strength of their commitment through NATO.

Prior to meeting with Tusk, during the last day of a six-day trip, Obama praised Polish leaders and acknowledged the sacrifices Poles have made in wars.

Poland's "incredible transformation" to democracy over the past two-and-a-half decades has made it a leader in the region, Obama said.

He singled out the successes of Poland's Solidarity movement, which in the 1980s led a broad opposition to the country's communist leadership.

"The solidarity leaders and others in this room launched a peaceful revolution that eventually led to a regime's collapse and the downfall of a broader system of Soviet repression," Obama said.

He added that there was an "understanding that history was being made because ordinary people were standing up and doing extraordinary things with great courage against great odds."

The president's visit to Poland included a stop at that country's World War II Warsaw Ghetto Memorial and a dinner with Central and Eastern European leaders hosted by Komorowski.

Before leaving Poland, Obama stopped at the Field Cathedral of the Polish Army, where he visited a memorial to the victims of a plane crash that killed Polish President Lech Kaczynski, his wife and several military leaders in April 2010.

Obama stood before a memorial wall with the names of the victims of the crash. He lit a candle and clasped his hands together and gazed silently at the names.