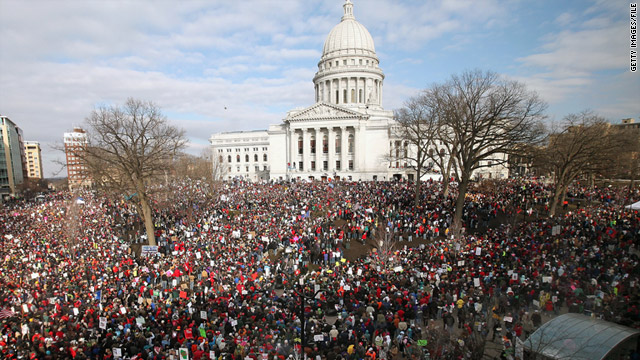 The Wisconsin Supreme Court is scheduled to hear arguments on June 6 to determine whether it will consider the case.

The law, which sharply curbs the collective bargaining rights of most state employees, has sparked an extremely heated, high-stakes political fight. Republicans insist that the measure is necessary to control skyrocketing public employee benefit costs and close a $137 million budget shortfall. Democrats argue that it is little more than an attempt to gut public sector labor unions, one of their core constituencies.

Similar battles are being fought in other state legislatures across the country.

Under the Wisconsin law, all public workers except police and firefighters would be required to cover more of their retirement plan contributions and health care premiums.

Raises would be tied to the rate of inflation, unless state voters approve an exception. Unions would be required to hold a new certification vote every year and would no longer be allowed to collect dues from workers' paychecks.

The amended bill, which had been stalled for weeks by 14 Democratic state senators who left Wisconsin to prevent a quorum -- and thus a vote on the measure -- then sailed through with an easy vote on March 9.

The state House of Representatives passed the bill, and Walker signed it into law March 11.