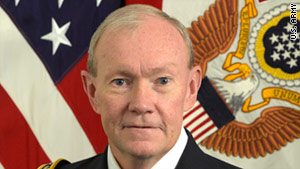 Washington (CNN) -- President Barack Obama will nominate Gen. Martin Dempsey, the relatively new Army chief of staff, to be the next chairman of the Joint Chiefs of Staff, several administration officials say.

The officials all warned, however, that since the appointment has not yet been officially announced, there is a chance the president could change his mind. The White House and Pentagon declined to comment on the nomination.

The selection would represent a turn from the conventional wisdom. For some time, Gen. James Cartwright, a four-star Marine who currently is vice chairman of the Joint Chiefs, was the perceived front-runner. But in a 30-minute meeting with Obama on Saturday, before the president left for Europe, Cartwright was told he would not get the job, according to a Defense Department official with direct knowledge of the meeting.

The official said that before walking into the meeting with the president, Cartwright had made up his mind he would be stepping down, given all the recent controversy.

But the handwriting clearly was on the wall that he was no longer the top choice. The official said neither Defense Secretary Robert Gates nor Mullen had recommended Cartwright for the job as chairman, which meant his nomination by the White House would have been difficult to justify to Congress.

Cartwright had also been the subject of an investigation by the department's inspector general over whistle-blower allegations of improper conduct with a junior female officer who fell asleep intoxicated in his hotel room during a business trip. He was cleared of wrongdoing by Navy Secretary Ray Mabus, but the official said Cartwright felt he was the still the subject of a "whispering campaign" after that.

The selection of Dempsey in itself is unusual because he took over as head of the Army only on April 11. But in that time, his outgoing personality has taken hold. Every week, he receives a list of soldiers both in the United States and overseas and calls them to get their direct opinions on life in the Army.

He has also gained attention for his long-standing habit of beginning some of his public speaking events by singing songs such as "New York, New York." On his Facebook page, he recently asked troops to offer their suggestions for music he could play at events where he is speaking.

"Here is a question for the younger soldiers. When I speak at events I like to use videos set to music to help reinforce my message. What song do you think of when you think of our great Army? Only rule: No offensive language," Dempsey wrote. The soldiers responded with suggestions ranging from Toby Keith to Metallica.

His sense of humor has opened Dempsey up for some ribbing as well, like at the ceremony when he took command of the Army.