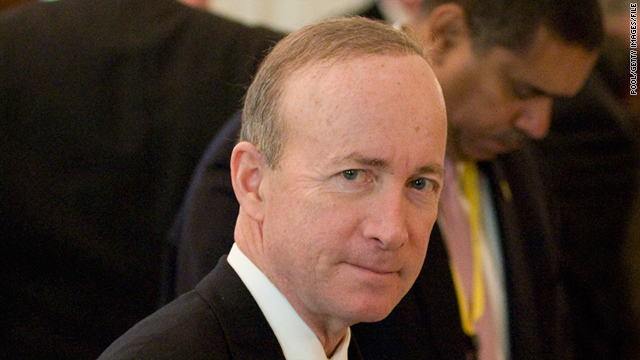 Indiana Governor Mitch Daniels, pictured, said family interests were most important in his consideration for a presidential bid.
STORY HIGHLIGHTS

"The counsel and encouragement I received from important citizens like you caused me to think very deeply about becoming a national candidate," Daniels said in the message distributed through the Indiana Republican Party.

"In the end, I was able to resolve every competing consideration but one, but that, the interests and wishes of my family, is the most important consideration of all."

With top Republicans anxious about what many view as the underwhelming state of the Republican field, Daniels was pressed to enter the race by close advisers and former Bush administration officials who worked with him when he served as White House budget director from 2001 to 2003.

Former Minnesota Gov. Tim Pawlenty, who is expected to announce Monday in Iowa that he will seek the Republican nomination, issued a statement Sunday praising Daniels.

"Mitch Daniels is a friend of mine and one of the best governors in the country," Pawlenty said. "While he may not be running, he is an intellectual powerhouse and will continue to play a leading role in the party's politics and the nation's policies."

Pawlenty also said he and Daniels "agree that America's out-of-control national debt is a threat to our nation's future, and that the next president must restore fiscal responsibility in Washington, DC."

Cain: 'I'm not running for second'

"Mitch Daniels is a great governor and a remarkable innovator," Gingrich said in a statement Sunday. "Mitch has brought successful reforms to Indiana that should be replicated across the country and in Washington. He will continue to be an important leader in solving America's problems."

Jon Huntsman, who recently stepped down as U.S. ambassador to China and is mulling a White House run himself, said "Mitch Daniels will be missed in this presidential debate, but his message about the most immediate threat facing our nation -- the massive debt -- will not go unheard."

In his statement, Huntsman said he has "learned a lot from (Daniels') leadership" and looks "forward to working with him to promote long-term solutions" to problems facing the United States.

Mississippi Gov. Haley Barbour, a Republican Party powerhouse, said last month that he would not run, and encouraged Daniels to go for it.

Indiana Democrats used Daniels' announcement to knock the Republican contenders. "We've disagreed with Mitch Daniels myriad times, but there's no doubt that his decision not to enter this race is a loss for Republicans," the Indiana Democratic Party said in a statement Sunday. "Daniels would have brought a serious tone to a GOP field that's thus far been characterized by silliness and distraction."

The killing of Osama bin Laden by Navy SEALs in Pakistan gave President Obama's popularity a big boost. But America's economic recovery remains sluggish. If it stays weak, some believe, Obama is beatable next year.

In considering a presidential bid, Daniels had publicly fretted about his family's well-being.

His dramatic marriage -- he and his wife Cheri divorced, then re-married in the 1990s -- had recently spilled into public view.

The famously private Cheri Daniels spoke at a spring fundraiser for the Indiana GOP this month, an event political observers watched closely to see whether the Daniels family was prepared to leap into the presidential fray.

Even after the speech, the Indiana first lady said she was "nervous" about her personal life becoming public fodder.

Daniels, too, seemed reluctant to join the race and openly questioned whether he had the desire to survive the long and exhausting marathon of running for president -- indecision that led some observers to dub him "The Hoosier Hamlet."

"Maybe I could do that, maybe someone else could do it better," Daniels said recently when asked whether he wanted to run.

It seemed throughout the decision-making process that his advisers and supporters wanted him to run more than he did.

"If I have disappointed you, I will always be sorry," Daniels wrote in the late night e-mail.

"If you feel that this was a non-courageous or unpatriotic decision, I understand and will not attempt to persuade you otherwise. I only hope that you will accept my sincerity in the judgment I reached."

Daniels, who became Indiana governor in 2005, would have presented himself as the most fiscally conservative choice among the Republican presidential candidates. He flipped a state budget deficit into a surplus, reduced tax rates and passed a sweeping education reform package in the most recent legislative session.

The announcement that Daniels will not run in 2012 comes a week after former Arkansas Gov. Mike Huckabee announced he would not seek the nomination. Huckabee won the first-in-the-nation Iowa caucuses in 2008 and was considered a top contender this time around.