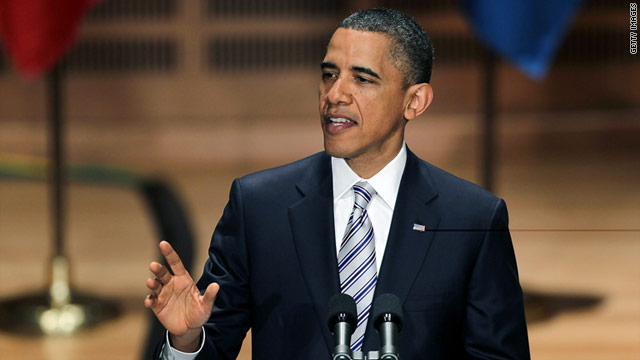 Obama to give address on Middle East
STORY HIGHLIGHTS

Washington (CNN) -- By now, top aides to President Barack Obama, like Dan Pfeiffer, have learned to just tune out the round-the-clock punditry that tends to build up every speech by this commander-in-chief as the pivotal moment in his presidency.

The phrase "stakes are high" has been used so many times for speeches about anything from health care, to the tragedy in Tucson, Arizona, to the war in Libya, that the White House communications director has voted with his remote control.

"My TV is off," Pfeiffer said Wednesday, pointing up at the blank flat screen in his West Wing office. "If you worried about Washington expectation-setting, you'd never get anything done."

And yet here we go again with soaring expectations for Obama's Thursday speech about U.S. policy in the Mideast -- though it's worth noting the president himself brings on some of the attention by trying to pull so much into one address.

As Pfeiffer told me, the president's goal in delivering this speech is to "take it from the Arab Spring through Libya and on to (Osama) bin Laden and put it in context for everyone."

Whoa, that's a lot to chew on in one speech.

Should Obama get even tougher on Syria?

How Obama can reach the Arab world
RELATED TOPICS

Then throw in a section about the seemingly intractable Israeli-Palestinian peace process -- plus attention-getting White House meetings with King Abdullah II of Jordan on Tuesday and Israeli Prime Minister Benjamin Netanyahu on Friday -- and now perhaps you can see why expectations have gotten a bit out of control.

And let's not forget that it was the president who framed this whole issue in such sweeping terms when he went to Cairo in 2009 to deliver the first-ever "speech to the Muslim world" by a U.S. president.

"I have come here to seek a new beginning between the United States and Muslims around the world," he said then. "One based upon mutual interest and mutual respect, and one based upon the truth that America and Islam are not exclusive, and need not be in competition."

Two years later, the Muslim world is still skeptical -- and the region is a tinderbox despite Obama's victory of tracking down bin Laden and finally bringing him to justice.

Obama's do-over on the Middle East

Sure, people in places like Egypt and Tunisia have gotten their first tastes of freedom. But the road to democracy is far from certain, and the economic inequities at the root of the original peaceful protests have not gone away.

Syrian President Bashar al-Assad is cracking down on peaceful protests in his own country, and a Libyan dictator is still dug in after weeks of NATO military action. Meanwhile, Palestinian Authority President Mahmoud Abbas has cut a reconciliation deal with Hamas, considered a terrorist group in the United States.

Obama's special Mideast envoy George Mitchell abruptly announced late last week that he's heading for the exit. And while Netanyahu is signaling he may be willing to give up more territory on the West Bank to jump-start peace negotiations, his past unwillingness to compromise raises questions about whether this is a sincere bid for peace or just a gambit to show up the Palestinians.

Oh yeah -- and while all of this has been happening, Iran has still been trying to get nuclear weapons, officials believe. Other than that, American interests in the region are in fine shape.

Enter Obama, who has an opportunity to make some sense of the tumult of the last few months and lay out a clear vision of what the United States can specifically do to help along some of these fledgling democracies.

As White House spokesman Jay Carney noted this week, the pace of change has been "more in five months than we've seen in 50 years in many ways in the region."

Nevertheless, nobody should be so delusional as to think the president can solve all of these major problems with one speech at the State Department.

But maybe this can be a turning point, and here are four keys to the speech that will determine its effectiveness in the months ahead:

Obama is laying out a specific economic aid plan that includes about $2 billion for Egypt as the United States seeks to help get at the root cause of so much of the upheaval in the Mideast. The protests were not just about human rights, they were about the hunger of millions of young Arabs who are simply looking for a job.

Some close observers are already dubbing this a Middle Eastern Marshall Plan -- a notion that administration officials are not knocking down -- but whether this will really have as much of an impact as George Marshall's efforts to rebuild Europe after World War II remains to be seen.

While it's indisputable that taking out such a dangerous terrorist was a positive development, the White House is going to have to be careful not to oversell the killing as the moment that somehow magically solves the region's many challenges.

One of Obama's top aides said before the speech that after "having taken out Osama bin Laden" while also winding down the war in Iraq, "we are beginning to turn the page to a more positive and hopeful future for U.S. policy in the region."

There's no question that bin Laden's death is a reminder to young Muslims that there's a better way than blindly following al Qaeda. But whether the United States can translate that into future policy successes is still a question mark.

People inside and outside the administration reading the tea leaves on Mitchell's exit from the peace process note that he was one of the people pushing for a specific Obama plan to try and bring a game-changer to the talks.

Mitchell's departure foreshadowed the fact that Obama's speech would not give many new specific details from the president, which is why the real moment to watch will be Friday when Obama and Netanyahu sit down at the White House.

Everyone will be watching the body language and looking for some give from either side. But former Mideast peace negotiator Aaron David Miller of the Woodrow Wilson Center warns that nobody should get too hopeful.

"You are going to have the optic of a 'Yes We Can' president on the peace process squaring off in a way against a 'No You Won't' Israeli prime minister," Miller said in an interview.

The Obama administration's decision on Wednesday to announce tough new sanctions aimed directly at Assad himself justifiably got lots of attention. After all, it was timed to tee up the president's speech and inoculate him against criticism that the United States has been too timid in taking on the Syrian government.

But perhaps the more noteworthy development was the sudden push by Obama officials to call for a "transition" to democracy in Syria, code for "It's time for Assad to go." This is important because it's readily apparent Assad is not going gently into the night.

As one person with close ties to the region warned privately this week, "It's going to be very bloody" before it gets better -- a chilling reminder that for all of the hopeful talk of an Arab Spring, Miller noted that this could quickly become the "Arab Winter."