No consensus in Middle East on Obama speech 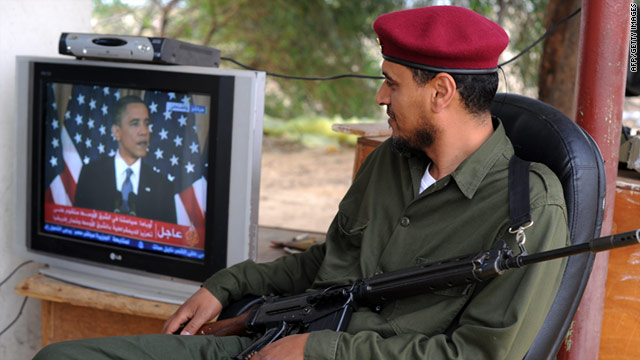 A rebel listens to President Obama's speech on TV while guarding an oil terminal in the Libyan town of Zuwaytinah on Thursday.
STORY HIGHLIGHTS

What did you think of Obama's speech? Share your view.

(CNN) -- Voices around the Middle East and North Africa gave mixed grades to Barack Obama's address on the region Thursday, with Libyan rebels calling it "good enough" and a Palestinian official calling it a "half-full glass."

In Benghazi, the heart of the Libyan revolt against longtime strongman Moammar Gadhafi, a rebel leader pronounced Obama's speech in support of democratic movements across the region "good enough."

"Overall, the speech was positive for Libya," said Jalal el-Gallal, a spokesman for the National Transitional Council. Rebel leaders were pleased to hear Obama call their provisional government "legitimate and credible," remarks that raised hopes of eventual U.S. recognition as the country's rightful government -- and accompanying aid.

Obama: Our message is simple

In his Washington speech, Obama pledged U.S. support for reform efforts across the Middle East and North Africa, warning leaders facing popular upheavals that "strategies of oppression and strategies of diversion will not work anymore." It comes amid the Arab Spring, popular revolts that have driven two regional autocrats from power and fueled calls for reform or open revolts in several other countries.

He also pledged additional economic aid for longtime U.S. ally Egypt and said the United States and European Union would push for expanded trade with the region.

That was good news for Riad Greiss, who watched Obama's address from a Cairo coffeehouse. Greiss said tourism -- one of the pillars of Egypt's economy -- has dried up since the pro-democracy protests that drove Hosni Mubarak from power after three decades.

"We are feeling it's getting worse, not better," Greiss told CNN.

On the eve of a meeting with Israeli Prime Minister Benjamin Netanyahu, the American leader restated the U.S. desire for a comprehensive settlement of the decades-old Israeli-Palestinian conflict. His call for an agreement based on Israel's pre-1967 borders drew criticism from Netanyahu, who called those frontiers "indefensible," but Obama also poured cold water on Palestinian efforts to seek a unilateral declaration of statehood at the United Nations.

Nabil Shaath, a senior adviser to Palestinian leader Mahmoud Abbas, called the speech a "half-full glass." He told CNN that Abbas would review the speech with all Palestinian factions and present Obama with some "specific requirements" for translating his rhetoric into "a real peace process."

On Syria, Obama praised the courage of Syrian protesters who have defied a violent crackdown by President Bashar al-Assad and blasted al-Assad's government for choosing "the path of murder" in response to calls for democratic change. Al-Assad, he said, "now has a choice: He can lead that transition or get out of the way."

But on the social media site Twitter, a supporter of the Syrian revolt sounded a note of disappointment.

"We Syrians started this alone and if ur too afraid to take action, we can handle this alone," the poster said.

Obama's passing reference to Yemen, in which he urged embattled President Ali Abdullah Saleh to "follow through" on his reported agreement to step down after 32 years in power, drew mixed reviews from anti-government protesters there.

"We wanted Obama to directly call Saleh to leave office the same way he did with Mubarak," said Saleh Kayyat, a youth leader in the capital Sanaa. "He did not do that. This is wrong, and he is not being honest with the wave of change in the Middle East."

Another protester, Ala'a Jarban, told CNN, "We had hoped to hear more." But Obama "spoke directly to the Yemeni people," Jarban said. "That's something we're not used to hearing, and it's an improvement. But we realize that President Obama cannot give as much to the Yemeni people as we can give to ourselves."

And Michele Dunne, a former White House and State Department expert on the Middle East, said Obama's address was "a lot more timid than it needed to be."

"He spoke a lot more about self-determination and reform than he did about broader concepts like democracy and freedom," Dunne told CNN.

"He has been pretty cautious about approaching these changes in the Middle East," added Dunne, now an analyst at the Carnegie Endowment for International Peace. "At least now he has said openly ... that the United States will stand up for its principles in its actions toward the Middle East."