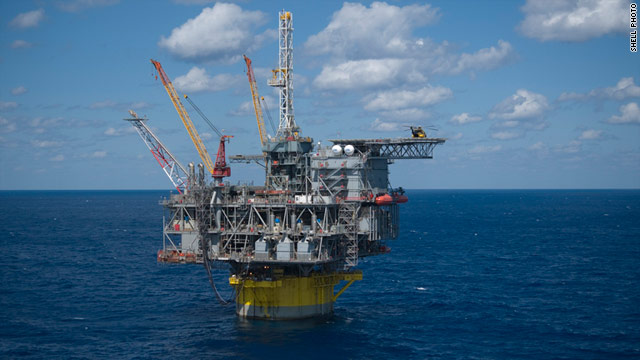 Shell's Perido platform is about 200 miles from the Texas coast and is considered the world's deepest offshore drilling facility.
STORY HIGHLIGHTS
RELATED TOPICS

The bill was defeated in a 42-57 vote. Sixty votes were required for passage.

On Tuesday, the Senate rejected a Democratic measure to strip major oil companies of about $20 billion in tax subsidies over the next 10 years and use the savings to pay down the federal deficit.

Among other things, the GOP bill would have required the Interior Department to complete a number of offshore lease sales in the Gulf of Mexico and off the coasts of Virginia and Alaska. It also would have extended lease terms by one year for Gulf contracts suspended by the drilling moratorium imposed by the Obama administration in the wake of the Deepwater Horizon oil disaster.

The GOP bill would have established a 30-day review period for drilling permit applications, and allowed for default approval if an application wasn't rejected within 60 days.

The Interior Department would have been required to provide a rationale for rejecting a permit application.

"At a time of near-record gas prices, this is a modest approach, a good first step that takes everyone's concerns into account so that we can actually achieve a practical result," said Senate Minority Leader Mitch McConnell, R-Kentucky.

"It's time to stop holding Americans back with moratoriums, fees, bureaucratic roadblocks, and the ever-expanding reach of a president who seems to think that business owners in this country need to get his permission first if they want to create jobs."

Top Democrats argued that the GOP plan would do little to ease the country's long-term energy crisis.

"We can't lose sight of the fact that our great country uses more than 25% of the oil (consumed in the world) on any given day, and we have less than 3% of the oil reserves," Senate Majority Leader Harry Reid, D-Nevada, said Tuesday.

"We need to do everything we can to increase domestic production, but there's a limit to what we can do," Reid said. The Republican measure "on its face doesn't make a lot of sense," he said.

Some senators from oil-producing states argued the bill didn't go far enough. Republican Vitter and Sen. Mary Landrieu, D-Louisiana, claimed it would actually "slow down the permitting process instead of streamlining and accelerating it."

The bill "would add an unnecessary and burdensome new layer of regulation regarding containment plans just when energy companies have figured out how to comply with the administration's new requirements," they argued in a joint statement.

Administration officials have said they are working to speed up the leasing process for the Alaska National Petroleum Reserve, while also giving oil companies better financial incentives to use and extend certain existing leases in the Gulf of Mexico and elsewhere.

The president also has indicated he backs steps to accelerate the testing of areas off the East Coast for possible future drilling.

At the same time, however, Obama also has announced the formation of an interagency working group to oversee Arctic drilling projects to make sure they meet health, safety and environmental standards.

GOP leaders argue the White House has not done enough to bring down gas prices, which are now topping $4 a gallon in many parts of the country.