Gingrich says voters should judge his ability to lead now 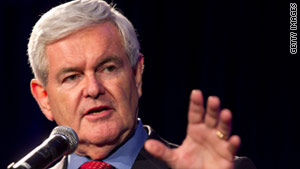 Washington (CNN) -- Judge me by what I can do for America now, rather than only by my mistakes in the past, Republican presidential candidate Newt Gingrich said Sunday.

The former House speaker, who announced his candidacy last week, told NBC's "Meet the Press" that he has made mistakes in life, including an adulterous affair that led to one of his two divorces.

Now the American people must decide whether he's the right person to lead the country at what Gingrich called a crucial moment in its history.

"I think that if people watch me, talk with me, get to know me, my hope is that a majority of Americans will decide that I can help this country get back on track in a way that no one else can," Gingrich said. "And if they decide that that's true, then I think we will have a very successful campaign. But people have every right to ask the tough questions and to measure somebody personally."

The nation faces a crossroads on three main issues -- the economy, core values that determine "what it means to be an American," and national security, he said.

At the same time, Gingrich called for bringing together top minds to work out solutions that break from traditional perceptions and models of how Washington works, saying there was a need to "rethink the government."

He rejected a GOP proposal to overhaul Medicare a decade from now with a voucher system that would help senior citizens purchase private health insurance, calling that too radical of a change.

Politicians, marriage and the media

What do voters think of Gingrich's past?
RELATED TOPICS

Instead, he advocated working with private corporations and others to create a plan that gets people to voluntarily choose other options than the government-run health coverage for senior citizens that is a major driver of rising federal budget deficits.

At the same time, Gingrich appeared to back another Republican proposal that would change the Medicaid health care program for the poor and disabled to a block grant program, with the federal government providing money to states.

Overall, Gingrich tread a cautious path on the health care issue, opposing the reform plan pushed through Congress by President Barack Obama and Democrats but agreeing with the core concept of personal responsibility in helping to pay for health care coverage.

"I think that there are ways to do it that make most libertarians relatively happy," he said. "I have said consistently we ought to have some requirement, you either have health insurance or you post a bond, or in some way, you indicate you're going to be held accountable."

Gingrich, who turns 68 in June, was first elected to Congress from Georgia in 1978. He rose to the second spot in the House Republican leadership, and was instrumental in helping to craft the 1994 Contract with America -- a conservative blueprint that helped the Republicans take control of the House.

He then became House speaker, but after a disappointing GOP showing in the 1998 congressional elections, Gingrich retired in 1999.

His push for President Bill Clinton's impeachment for allegedly lying to a federal grand jury after an affair with a White House intern got labeled as hypocrisy when news emerged that Gingrich also had an adulterous affair that broke up a previous marriage. Now divorced twice, Gingrich conceded Sunday he made decisions that should be questioned by voters assessing him as a candidate.

"I have made mistakes in my life. I had to go to God to seek forgiveness and reconciliation," Gingrich said, calling for people to "decide whether or not I am today a person who can lead the country and save us from enormous problems."

He also said it was fair to ask if he had the discipline and judgment to be president.

One of his "great weaknesses" is that he is both a political leader and a teacher/analyst, Gingrich said.

"Somebody who offers to lead America has to be much more disciplined and much more thoughtful than an analyst," he said. "Analysts can say anything they want to because there's no downside. But the person to whom you're entrusting leadership of the United States had better think long and hard before they say things. I think that's a fair criticism of me."