To announce or not: Explaining presidential exploratory committees 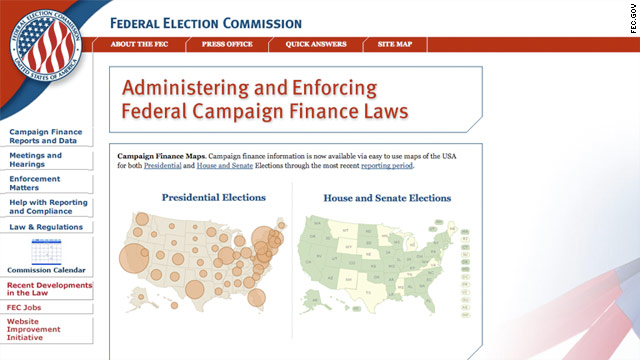 A common way to explore a presidential bid is to create a federal campaign committee through the Federal Election Commission.
STORY HIGHLIGHTS
RELATED TOPICS

Washington (CNN) -- The path to the White House used to begin often with a fancy public event where the candidate, flanked by his or her (usually his) loved ones, gave a full-throated declaration of his or her candidacy for president amid balloons, confetti and patriotically colored bunting.

Today, candidates usually are much more coy about wading into the presidential waters. Though some candidates do still hold traditional announcement events, most will first ease themselves into the process by creating what's called an exploratory committee.

Though exploratory committees have been around for decades, modern candidates have flocked to these oft-mentioned and oft-misunderstood vehicles to soft-launch their presidential aspirations.

As the field of 2012 presidential candidates takes shape, many White House hopefuls are deciding how to draw the most media attention, for the longest period of time, to their presidential intentions.

Former House Speaker Newt Gingrich, who never technically formed such a exploratory committee but instead filed papers with the Internal Revenue Service to create "Newt Exploratory 2012," is now skipping that phase, declaring on Twitter on Wednesday that he is indeed seeking the 2012 Republican nomination for president.

Meanwhile, it's unclear if one has to make any announcement at all to be an official presidential candidate, according to Federal Election Commission guidelines.

Here's a look at the rules and the reality for presidential candidates -- and some of the vague, confusing and often misunderstood aspects of federal election law regarding these so-called exploratory committees:

Background: So you want to run for president?

When you hear of people "filing papers with the FEC" to run for president or some other federal office, these are the documents in question.

Once a candidate does so, he or she is a candidate for president in the eyes of the federal government. (Getting on the ballot in individual states is up to the candidate.) From this point forward, the candidate must file regular fundraising/spending disclosure reports and is subject to federal contribution limits.

Q: How does one explore a bid (aka "testing the waters")?

A potential candidate who is thinking about running for a federal office, including the presidency, has the option of "exploring" the feasibility of mounting a campaign (referred to as "testing the waters" in federal regulations) before committing to become a candidate and filing the documents referenced above.

"Exploring" a presidential bid allows a potential candidate to gauge popular support quietly and to begin developing a base of supporters and contributors without being subjected to the rigorous disclosure requirements placed on full-fledged candidates. Exploratory candidates may conduct a variety of activities to test the waters, such as conducting polls, traveling and raising money.

Potential candidates are not required to explore a bid first before becoming a candidate; they may skip the exploratory phase entirely.

Q: Is someone with an exploratory committee a candidate?

Whether someone is or is not a candidate is, in a practical sense, a matter of semantics. Legally, anyone who creates a federal campaign committee and has submitted a Statement of Candidacy is a candidate, regardless of whether his or her campaign committee contains the word "exploratory."

For news organizations, the distinction is more difficult since a presidential hopeful who sets up a campaign committee with the FEC and calls it an exploratory committee might still say that no decision has been made and that he or she is not yet a candidate.

The reality is that many (but not all) individuals who are seriously considering a bid for president take the legal steps to become a candidate before they have decided that they want to run or before they are prepared to declare their candidacies publicly. Some exploratory candidates, however, do not create an exploratory committee with the FEC and therefore do not officially become legal candidates when they create their exploratory committee.

Q: What are the common types of exploratory committees?

As mentioned earlier, potential candidates who are exploring a bid for federal office are not required to set up a committee during this exploratory phase; however, most do. The most common types are:

The most common path for those exploring a presidential bid is to create a federal campaign committee through the FEC and to call it an exploratory committee.

In the 2008 campaign, Barack Obama, Hillary Clinton, John McCain, Mitt Romney, Mike Huckabee and others all announced the creation of exploratory committees, but they created them with the FEC, meaning they all filed Statements of Candidacy and Statements of Organization.

This, as far as federal election law is concerned, made them full-fledged candidates, even if they publicly said they had not made a decision yet. Even though they all had the term "exploratory committee" in the names of their committees, they became official, legal candidates for president of the United States once they filed their papers with the FEC.

The law doesn't make a distinction between these so-called exploratory committees and a full-fledged presidential campaign committee. Both are subject to the same disclosure requirements and contribution limits.

These corporations are not required to file FEC reports but are subject to whatever disclosure and tax laws apply in their own state. Financial activity of these corporations is only disclosed at the federal level if the exploratory candidate eventually becomes a full-fledged candidate.

In the 2008 campaign, Rudy Giuliani, Ron Paul and Fred Thompson all created state corporations in their home states to serve as their exploratory committees before submitting any paperwork with the FEC.

Another option is to create an exploratory committee as a so-called 527 political organization through the IRS. As with federal campaign committees, 527 committees must disclose their donors and expenditures but on a less-frequent reporting schedule than their FEC-created counterparts.

Although 527 organizations technically may accept unlimited contributions from donors, donors to 527s that serve as presidential exploratory committees are subject to the same contribution limits that apply to any donors under federal law, which is $2,500 per election for individuals and $5,000 for political action committees.

Q: How do you raise money in the exploratory phase?

Federal election regulations say that money raised in an exploratory phase (before papers are filed with the FEC) should only be spent on activities directly related to "testing the waters," such as paying for airfare to meet with possible supporters in Iowa or New Hampshire, or commissioning a public opinion poll. Exploratory money may not be used for things such as "Vote for so-and-so" TV ads or activities that clearly indicate the individual is beyond "testing the waters" and is actually running for office.

Once an exploratory candidate raises or spends more than $5,000 specifically for "campaign" purposes, that individual is then considered to be a full-fledged candidate in the eyes of the law and is then required to file a Statement of Candidacy and Statement of Organization and begin filing regular fundraising/spending reports.

The law does state that a potential candidate has gone beyond the exploratory phase if he or she raised more funds than necessary or amasses funds for after declaring candidacy, but it does not specify when these thresholds are reached.

Q: When does an explorer become a candidate?

The most common way to become a candidate is to file the Statement of Candidacy and Statement of Organization with the FEC. However, the FEC may intervene and force a presidential hopeful to become an official, legal candidate as the direct result of their actions during the exploratory phase.

If a potential candidate essentially "acts" like a candidate, then he or she is subject to the full disclosure requirements of a campaign committee. According to the FEC, some of the tell-tale signs that a potential candidate has moved beyond the exploratory stage are: raising more funds than reasonably required to test the waters, amassing funds to be used after the candidacy is established, using political ads publicizing one's candidacy, making or authorizing statements that refer to the individual as a candidate and seeking ballot access.

Q: Why does anyone still bother setting up an exploratory committee?

The original intent of the law was to allow individuals to decide quietly whether or not they have what it takes to run for federal office without subjecting them to the requirements placed on full-fledged candidates.

While this is still true, particularly on the Senate and House level, so-called exploratory committees on the presidential level have come to be used as a rhetorical device by candidates who want to signal their interest in running and begin raising money and putting together a campaign operation but, for whatever reason, may not want to declare themselves candidates publicly. This could be to save face if things don't go well, or to save the public announcement of candidacy for a big, high-profile event down the road.

For a more detailed explanation of the "exploratory"/"testing the waters" phase and filing for office as well as links to the federal laws and regulations, please read an explainer from the Federal Election Commission.