Google and Apple on Capitol Hill for high-tech privacy hearing 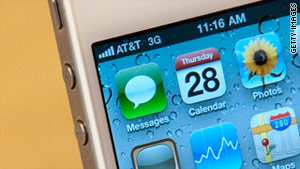 (CNN) -- Executives from Google and Apple may get an old-fashioned grilling at Tuesday's Senate hearing on high-tech privacy.

Their session before the Senate Judiciary Subcommittee on Privacy, Technology and the Law comes a few weeks after it was revealed that smartphones and tablets for both companies can track information about the whereabouts of their users and store that data.

Sen. Al Franken, who chairs the new subcommittee, has said he's glad Google and Apple aren't sidestepping the hearing that will look into whether federal consumer privacy laws are keeping pace as technology advances.

"I look forward to hearing from them," he said late last month. "Each of the witnesses at the hearing will play a critical role in helping us better understand this complex issue."

Your gadgets are watching you

Researchers revealed last month that iPhones and iPad 3Gs apparently collect continuous information about the whereabouts of their users and store that data in a secret file.

The location file is unencrypted, so anyone with access to your phone or computer could, in theory, get access to it and know where you've been. The researchers -- Pete Warden and Alasdair Allan -- say Apple has "made it possible for anyone from a jealous spouse to a private investigator to get a detailed picture of your movements."

It's possible someone could look at this file and know where you've been. But they would have to gain access to your phone or your computer, where the file is stored.

Google, which provides the popular Android operating system for millions of smartphones, readily admits it collects location data, but only from users that give their OK.

Any location data that is sent back to Google location servers is anonymized and is not tied or traceable to a specific user, according to the company.