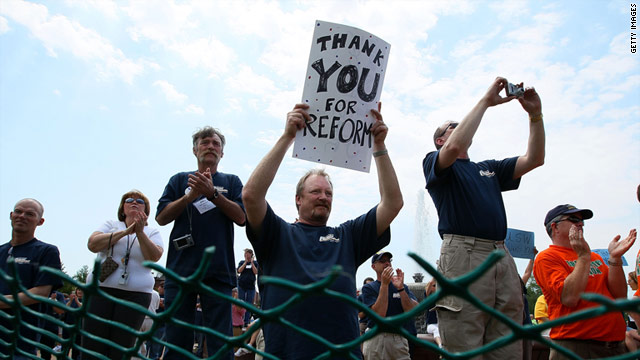 A union member holds a sign thanking Congress for healthcare reform during a May 6 rally in Washington.
STORY HIGHLIGHTS
RELATED TOPICS

Federal judges across the country have been divided over the constitutionality of the law's "individual mandate" requiring most Americans to buy health insurance by 2014 or face financial penalties.

The law also mandates the expansion of Medicaid, the low-income health care program administered by the states.

The Supreme Court could be asked to take formal jurisdiction of one or more health care appeal by this fall and perhaps decide the matter by 2012, a presidential election year.

The three-judge appeals panel will hear two cases Tuesday, one filed by the state of Virginia and the other by private Liberty University, a Christian evangelical institution.

The Liberty University plaintiffs, among other things, contend the law would allow taxpayer dollars to fund abortions, a claim the Obama administration rejects.

Virginia state officials argue the Constitution's Commerce Clause does not give government the authority to force Americans to purchase a commercial product, like health insurance, that they may not want or need. The state equates such a requirement to a burdensome regulation of "inactivity."

The Justice Department counters that since every American will need medical care at some point in their lives, individuals do not "choose" to participate in the health care market. Federal officials have cited 2008 figures of $43 billion in uncompensated costs from the millions of uninsured people who receive health services -- costs which are shifted to insurance companies and are passed on to consumers.

Appeals courts in Atlanta and Cincinnati are set to tackle the divisive issue next month.