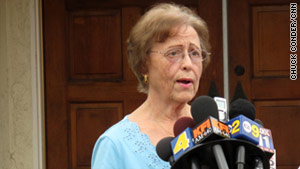 (CNN) -- A California Republican group censured one of its own Thursday, saying her words and actions since sending an e-mail last month depicting President Barack Obama as a chimpanzee have been potentially offensive, damaging and insincere.

"The Republican Party of Orange County condemns racism in any form, and this censure is consistent with that position," the group said in a statement.

A phone call Thursday night to Davenport, for her comment on the censure, was not immediately returned.

Last month, she found herself in a storm of controversy after forwarding an e-mail she says she received from a friend. It contained a doctored photo styled like a family portrait, showing two adult chimpanzees and a baby. The younger chimpanzee had a photo of Obama's face superimposed over the animal's face.

The caption that ran with the photo read, "Now you know why no birth certificate."

Davenport, who is a Tea Party activist and an elected member of the central committee of the Republican Party of Orange County, said she felt the e-mail was a joke, CNN affiliate KTLA reported. It referred to debate over whether or not Obama was born in the United States.

Soon after it came out, the county's GOP chairman, Scott Baugh, called for Davenport's resignation in a Twitter message posted on the group's website. California's Democratic Party has also demanded that Davenport step down.

In an apology that included two Bible passages, Davenport initially said she would not repeat her error.

Later, on April 20, she told reporters she wanted to "humbly apologize and ask for your forgiveness for my unwise behavior." Davenport admitted that, "unintentionally, I have offended many" -- though she insisted that she was not racist.

She has refused to resign, citing what she called an overwhelming number of appeals she has gotten from her constituency asking her not to do so. She represents the state's 72nd Assembly District for the Republican Central Committee.

In its statement Thursday, the Orange County Republican committee called out Davenport and said that she was aware the e-mail "could be viewed as offensive."

"Then instead of owning up to her mistake and putting an end to the story, Mrs. Davenport immediately sought to blame others and downplay the matter as a joke," the GOP committee said, calling the first apology she'd made in a statement "not contrite" and "conditional."

The committee viewed her second apology as more sincere, while noting that the "three-day delay in issuing that apology resulted in a torrential barrage of unnecessary media attention."

"Finally, the committee found that much of the good that was accomplished by Mrs. Davenport's second apology was undone by going on a media tour that continued to blame others for her actions," the statement said.

During her press conference, Davenport referred to the e-mail as "political satire" -- insisting she had no intention of doing anything that would be racist.

Obama and his staff produced copies of his birth certificate indicating he was born in Hawaii when he was running for president in 2008. On April 27, after months of further speculation amid claims he was born in another country, he released the long-form of the same certificate in hopes of finally quelling the controversy.

"We do not have time for this kind of silliness. We've got better stuff to do," the president said afterward.