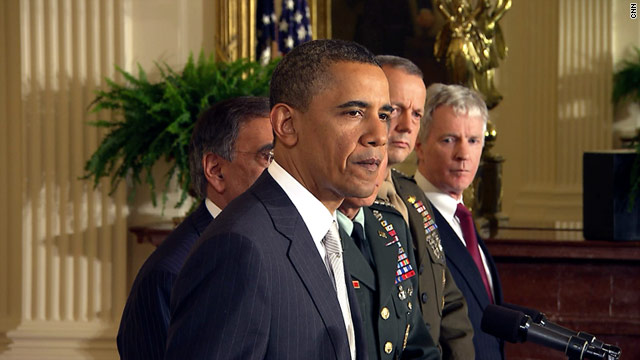 Obama's new team has to hurry to squeeze hundreds of billions out of the planned Pentagon budget for the next decade or so.
STORY HIGHLIGHTS

Washington (CNN) -- When President Obama unveiled his revamped national security team in the East Room, he quickly joked about how badly Defense Secretary Robert Gates has been itching to finally get serious about retirement.

"When I took office, Bob Gates had already served under seven presidents, and he carried a clock that counted down the days, hours, and minutes until he could return to Washington state with his wife, Becky," Obama said. He added that he felt lucky to get Gates to keep pushing the exit date back to deal with wars in Afghanistan and Iraq as well as some major budget decisions confronting the nation.

First it was Obama during the presidential transition in December 2008 getting Gates to stay on for just one more year for continuity's sake. Then that grew to staying on for first 2½ years of the administration.

Senior officials tell me that Obama had even been hoping to somehow persuade Gates to stay on through all four years of the first term for the good of the country, but the president finally gave in and then set his sights to twisting the reluctant arm of CIA Director Leon Panetta to delay his own retirement to take the top spot at the Pentagon.

As Obama noted to laughter about his lobbying of Gates, "At some point along the way, Bob threw out that clock."

It was an apt metaphor, because top defense analysts say the clock is ticking on the Obama administration as its first -- and possibly only -- term in office winds down.

"The timing right now is really critical in terms of how the resources will get sorted out," said David Berteau, head of the defense industrial practice at the Center for Strategic and International Studies.

Berteau is referring to the fact that Panetta and the rest of the new team will have just 18 months to deal with the arduous task of somehow squeezing hundreds of billions of dollars out of the planned Pentagon budget for the next decade or so -- it's pretty much impossible to find a way to get the numbers in Obama's deficit-cutting plan to add up without significant defense savings.

And they have to do this while winding down two very expensive wars in Afghanistan and Iraq, trying to help finish the mission in Libya, preparing for possible conflicts anywhere from Syria to North Korea, all the while trying to figure out how things will settle down in the Mideast.

No wonder Panetta had to have his arm twisted to take this job, and he even joked to the crowd that the departing Gates was easy to spot at the event because he was the "guy with the big smile next to me" on the platform.

Panetta immediately noted the mind-numbing change the world has witnessed in recent months. "As the son of immigrants, I was raised to believe that we cannot be free unless we are secure," he said. "Today we are a nation at war. And job one will be to ensure that we are the strongest military power in the world to protect that security that is so important to this country."

Panetta's other big task will be trying to deal with the competing goals of protecting America's military superiority and drastically reducing the Pentagon's $550 billion annual budget. The former White House chief of staff and budget director in the Clinton administration said he is committed to finding that balance.

He called it "a time for hard choices."

"It's about ensuring that we are able to prevail in the conflicts in which we are now engaged," Panetta said. "But it's also about being able to be strong and disciplined in applying our nation's limited resources to defending America."

Panetta emphasized that "none of this will be easy," and administration officials say privately this is a major reason why the president was so heavily focused on picking experienced old hands to round out the new(ish) national security team, with Gen. David Petraeus nominated to replace Panetta at the CIA.

While some critics have dismissed the changes as a game of musical chairs, it's worth noting the people filling those chairs are heavily respected on both sides of the aisle. When was the last time you heard a Republican touting the "honesty and integrity" of an Obama nominee as House Intelligence Chairman Mike Rogers, R-Michigan, did?

"While I'm sorry to see Mr. Panetta go (from the CIA), his talent and leadership will be put to great use leading the Defense Department," Rogers said. "Mr. Gates is leaving huge shoes to fill at the Pentagon, and I can't imagine a better candidate to replace him."

There has also been praise for the selections from Republicans like Sen. Lindsey Graham of South Carolina, a senior member of the Armed Services Committee who will vote on the nominations of Panetta and Lt. Gen. John Allen, who has been nominated to replace Petraeus as the allied commander of the war in Afghanistan.

Obama also nominated the highly respected Ryan Crocker to serve as the new U.S. ambassador in Afghanistan ahead of the July deadline that is fast approaching, which the president has held up as a pivot point for starting to bring home U.S. troops.

Besides being experienced, many of these players know each other very well. When the war in Iraq was falling apart, it was then-President George W. Bush's decision to install Petraeus as the commander on the ground and Crocker as the U.S. ambassador in Baghdad -- with Allen serving under Petraeus on the military side -- that was one of the pivotal moments that got the mission back on track.

"I mean Petraeus and Crocker were the 'Dream Team' in Iraq," Berteau said. "These guys have all worked together."

That is significant because an administration can sometimes waste months and months getting key players to gel. "It provides the opportunity to get things done because you don't have to waste your time in transition," said Berteau.

The time needs to be used wisely to tackle all of the challenges the team will face in the next year and a half, including nothing short of the most momentous transformation of the American military in a couple of decades.

"We are about to embark on the next big defense drawdown," Berteau said. "Panetta is uniquely qualified because he was at the White House during the last big drawdown in the early 1990s."

Indeed, Panetta served as White House chief of staff and the budget director during the Clinton administration and helped balance the federal budget. He was able then to benefit from his previous tenure as chairman of the House Budget Committee, and he will be able to draw upon that deep reservoir of respect again now.

We are about to embark on the next big defense drawdown. Panetta is uniquely qualified because he was at the White House during the last big drawdown in the early 1990s.
--David Berteau, Center for Strategic and International Studies.
RELATED TOPICS

"I am pleased that my friend Leon Panetta will bring his long record of service, first in Congress and then in both the Clinton and Obama administrations, to the job of secretary of defense," said Senate Majority Leader Harry Reid, D-Nevada. "Director Panetta is taking the helm at a crucial time for the Pentagon, in the midst of two wars and as we close in on our July deadline to begin the drawdown of troops from Afghanistan. We need the kind of experienced leadership he can provide."

The budget battles ahead will only be further complicated by the 2012 campaign, of course, as both parties trade charges and potentially move farther from compromise. And if Obama ends up losing the race, the clock is ticking on Panetta to leave the administration's imprint on the Pentagon budget for the next decade to come.

Obama, of course, hopes to win a second term. And just as Gates jokingly thanked Obama for "inviting me to stay on -- and on and on," the president seems to already be lobbying Panetta to stay beyond the next 18 months.

At the East Room event, Obama noted that after 40 years in public service, Panetta had wanted to go home to retirement with his wife.

"Leon, I know that you've been looking forward to returning now to Sylvia and your beautiful Monterey, so I thank you for taking on yet another assignment for our country," Obama said, adding with a sly smile: "And I hope you don't have a clock."