Is the next immigration fight over 'anchor babies'? 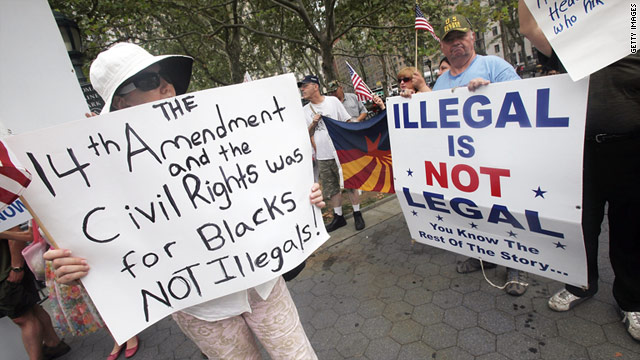 Washington (CNN) -- While the nation's political dialogue was hijacked over the issue of President Obama's birthplace, bubbling below the surface is the fact that a child of illegal immigrants born in the United States -- derided by some as "anchor babies" -- could one day be president.

Under the 14th Amendment to the U.S. Constitution, "All persons born or naturalized in the United States, and subject to the jurisdiction thereof, are citizens of the United States and of the State wherein they reside."

So under the law, children of illegal immigrants born on U.S. soil are automatically granted citizenship. It's a point backed up by the U.S. State Department and the Department of Homeland Security. However, some critics, such as U.S. Court of Appeals Judge Richard Posner, have questioned whether those children are "subject to the jurisdiction" of the U.S.

Stoking the larger debate is the fact that under the 1965 Immigration and Nationality Act, those children may sponsor other family members for entry into the U.S. when they reach age 21.

Critics say they, in turn, anchor family members outside the U.S. on American soil, creating an end-run for illegal immigration.

The issue is not a new one. In 1993, Sen. Harry Reid, who is now the Senate majority leader, blasted the rise in what amounts to legal illegal immigration because of the stress it places on the system.

"If you break our laws by entering this country without permission and give birth to a child, we reward that child with U.S. citizenship and guarantee a full access to all public and social services this society provides. And that's a lot of services," he said.

That position has been recently taken up by Sen. Lindsey Graham, R-South Carolina, among others in Congress.

And state governments are taking matters into their own hands.

In February, Arizona state Sen. Ron Gould, a Republican, pushed for a bill that would ban U.S. citizenship for these babies. The proposal was later rejected.

I think most of the legal and constitutional scholars who have spoken on the issue have said the Constitution is clear on the issue of citizenship.
--Clarissa Martinez de Castro, National Council of La Raza

In January, a group known as the State Legislators for Legal Immigration proposed a legislative "fix" to prevent these babies from being citizens. The coalition of lawmakers from 40 states says the 14th Amendment has been wrongly applied to those born purposefully on U.S. soil to gain American citizenship.

The National Council of La Raza, the largest national Latino civil rights and advocacy organization in the U.S., is lashing out against recent attempts in several states to change the 14th Amendment because of anchor babies.

And the group has the backing of the American public, according to a 2010 nationwide poll by the Pew Research Center for the People & the Press. A majority of Americans -- 56% -- opposed changing the 14th Amendment; 41% favored changing it.

Clarissa Martinez de Castro, director of immigration and national campaigns for the National Council of La Raza, says opponents want to take their cause all the way to the Supreme Court.

"Even the state legislators who announced they were trying to push this measure and tinkering with the 14th Amendment acknowledge that what they're seeking is a lawsuit and to take this to the court," she said. "I think most of the legal and constitutional scholars who have spoken on the issue have said the Constitution is clear on the issue of citizenship."

Martinez de Castro said that if advocates want to change the nation's immigration policy, they should fix it rather than tinker with the Constitution.

Jon Feere, a policy expert with the nonpartisan Center for Immigration, agrees.

"The result of that is we have an influx of illegal immigration," he said. "So I think a lot of people feel that our immigration and citizenship system is controlled by immigrants rather than citizens, because when you think about it -- 'Who is a U.S. citizen? What will our future look like?' -- The (babies) are the ones who decide."

The American Resistance organization says "the 14th Amendment was ratified in 1868 to protect the rights of native-born Black Americans, whose rights were being denied as recently freed slaves."

The group, which describes itself as "a coalition of immigration crime fighters opposing illegal and undocumented immigration," said that the intent of the amendment "was clearly not to facilitate illegal aliens defying U.S. law at taxpayer expense."

According to a Pew Hispanic Center study released in late 2010, 79% of the 5.1 million children of unauthorized immigrants were born in the U.S.

Almost one of four children born in the U.S. in 2008 had parents who were immigrants, the study also found. Of those, 16% of the parents were legal immigrants and 8% were in the U.S. without proper documentation.

In addition, more than three-fourths of all unauthorized immigrants in the United States in March 2009 were Latinos, the study said. And nearly one of every four children under age 18 in the nation was Hispanic. That trend is likely to continue, the study found.

CNN's Arthur Brice and Shannon Travis contributed to this report.