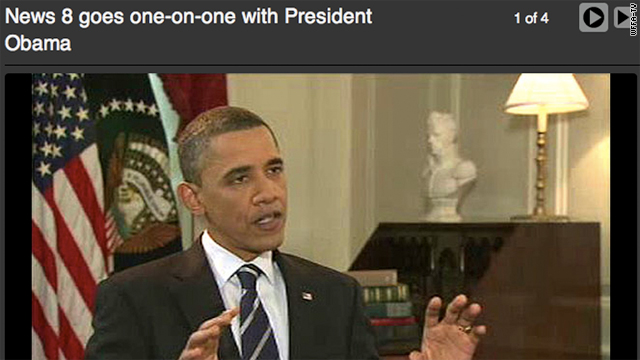 Will there be a next time?

President Barack Obama got into a somewhat tense exchange with a Dallas TV reporter during an interview Monday at the White House.

After the interview was over, Obama advised WFAA-TV's Brad Watson to "let me finish my answers the next time we do an interview, all right?"

Obama was grilled on a variety of topics -- especially on if he's trying to put Texas in play for the 2012 election. Texas is, after all, a solid Republican state, which he lost in the last presidential election.

"We lost by a few percentage points in Texas," he started before Watson corrected him, saying, "Well, you lost by about 10."

And cue Obama: "I understand. If what you're telling me is that Texas is a conservative state, you're absolutely right."

Mediaite's Colby Hall notes that "Watson was far more interested in promoting his challenging stance than anything the president said, evidenced by how much of Watson's voiceover and questions are featured instead of Obama's answers."

Is kickball too dangerous for kids?

CNN: Is Trump playing us for suckers?

Wonkette: Obama Back Trying To Trick People To Believe He Wants To Change Politics

Daily Mail: NBC scales back their royal wedding coverage 'because William and Kate are so boring'

"This weekend, Donald Trump said President Obama will go down as the worst president in the history of the United States. ... This is from a fool (who took) seven weeks to fire Gary Busey. You don't even know what the hell you're doing!" -- George Lopez

"NBC executives say if Donald Trump runs for president they will not renew 'Celebrity Apprentice.' So, some good may come of this" -- Conan O'Brien

"Today the boyhood home of Bill Clinton is designated a national historic site? That's great. Congratulations. But I hope it stops there because there's a million places that can say Bill Clinton slept here" -- Craig Ferguson