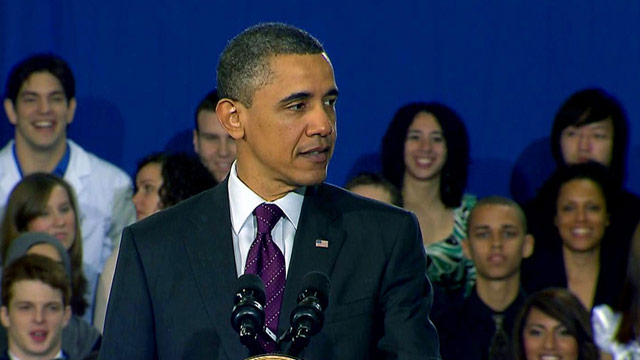 Washington (CNN) -- Facing a possible future downgrade of America's credit rating, President Barack Obama on Tuesday told the first of three town hall-style meetings this week that a "big philosophical divide" exists between his approach to deficit reduction and how Republicans think.

Given such free rein, Obama delivered campaign-style messages that emphasized what he called his balanced approach to reducing federal deficits and bringing down the national debt versus a Republican proposal that the president characterized as unfair to middle-class Americans and vulnerable communities such as senior citizens.

He repeated criticisms raised by Democrats and interest groups that a House proposal would double how much the elderly pay for health care, reduce student loans and strip needed investment for much-needed repairs and rebuilding of roads and bridges. In particular, Obama noted that the GOP plan would double the health care costs of senior citizens on Medicare, according to the non-partisan Congressional Budget Office.

"It's not hard to save the government money if your solution is to say, 'Here, you pay for it,'" Obama said in characterizing the Republican philosophy.

Instead, he emphasized what he called a balanced approach that both cut spending and increased revenue by ending tax cuts for the wealthy; maintained or increased spending in education, research and infrastructure development; and continued reforms launched in last year's health care bill of the Medicare and Medicaid government-run health systems for senior citizens and the poor and disabled.

"Those blessed with high income can afford to pay a little bit more," Obama said of his plan to restore the tax rate for families earning more than $250,000 a year to higher rates from the 1990s. "Not that much. Just go back to when Bill Clinton was president. That's not that long ago."

As the audience applauded, Obama said he wanted a society where "the American dream was affordable to everybody."

Obama will hold similar events at Facebook headquarters in Palo Alto, California, on Wednesday, and then Reno, Nevada, on Thursday to take questions on the economy.

While the issues are not necessarily linked, Congressional Republicans are demanding significant fiscal reforms, such as a balanced budget amendment and mandatory spending caps, in exchange for their necessary support to raise the debt limit.

Democrats respond that the debt limit issue should be separated from politically inspired fiscal mandates because any question of whether the government can pay its debt will bring damaging repercussions from markets and the international community.

The first evidence of such a reaction came Monday, when Standard & Poor's lowered its outlook for the nation's long-term debt.

While reaffirming its top-tier rating for the U.S. economy, S&P lowered its outlook for America's long-term credit rating to "negative" from "stable" based on the uncertain political debate around the nation's fiscal problems. It said resolution of major issues was unlikely ahead of the 2012 elections.

The change means that there is a one-in-three chance that S&P could downgrade the nation's "AAA" credit rating within two years. That would make it harder for the U.S. government to borrow money to fund its activities.

Standard & Poor's is one of three major agencies that evaluate public and private debt issues. Their ratings are key to measuring an investor's risk in buying the debt, an important factor in determining interest rates.

While news of the S&P report dominated headlines and broadcasts, there was no mention of it at Tuesday's event by either Obama or any of those who questioned him.

Obama and the White House want to separate the debt ceiling and fiscal reform issues to avoid spooking markets and trade partners, arguing that such a vital issue should be free of any possible political drag.

"The issue is, the debt ceiling has to be raised, and it cannot be held hostage to a process that is very difficult and very complicated," White House Press Secretary Jay Carney told reporters on Monday. "We cannot make it conditional."

Calling the possibility of a U.S. default on its debt obligations "unthinkable," Carney said congressional leaders from both parties have indicated that the debt ceiling will be raised and said Obama "takes them at their word."

Republicans will not move forward on a measure to raise the country's debt ceiling unless "it is accompanied by serious reforms that immediately reduce federal spending and end the culture of debt in Washington," Cantor said in a statement.

The U.S. debt is expected to hit the country's $14.294 trillion ceiling next month, though congressional leaders say the Treasury can take steps to put off the deadline until early July.

On the broader fiscal reform issues, Obama noted Tuesday that both his proposal and the House Republican plan acknowledge the problem posed by expanding deficits and the growing national debt, and that both call for $4 trillion in deficit reduction in the next decade or so.

Vice President Joe Biden's office announced Monday that his first meeting with legislators to try to work out a fiscal reform deal will take place May 5. Obama proposed the talks when he outlined his policy last week, and Republican leaders announced Tuesday that Cantor and Sen. Jon Kyl of Arizona would represent them.

At the same time, a bipartisan group of senators known as the "Gang of Six" is nearing consensus on its own comprehensive reform plan based on the report issued last December by a deficit reduction commission appointed by Obama, one of the participants, Democratic Sen. Mark Warner of Virginia, said Sunday.

"We are very close," Warner told reporters of the backroom talks involving fellow Democratic Sens. Dick Durbin of Illinois and Kent Conrad of North Dakota, as well as Republican Sens. Tom Coburn of Oklahoma, Mike Crapo of Idaho and Saxby Chambliss of Georgia. "We have been working for months on a plan that takes on entitlement reforms, tax code, and put us back on a path toward fiscal sustainability and recognizes that we need to still grow the economy."

"That means most of his cuts have to come out of health care, frankly for seniors, and it is an enormous additional burden to seniors," Warner said. "What we are proposing is an approach that says let's put revenues, let's put defense spending, let's put the entitlement programs -- all of these on the table."

However, Republican Sen. Mike Lee of Utah, who is not part of the Gang of Six, rejected any tax increase on wealthy Americans -- as proposed by Obama and Democrats.

"Everyone agrees that the entitlement reform is necessary, and I don't think the tax increase is acceptable, especially right now, when our economy is this weak," Lee told reporters. "If we're going to talk about simplifying the tax code, about eliminating some loopholes, then that's one thing. But if we are talking about raising rates, that's off the table on my book."