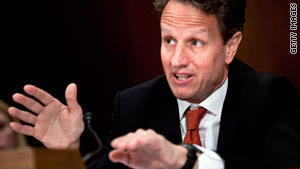 Treasury Secretary Tim Geithner has warned warned that the world is watching how the U.S. handles its debt issues.
STORY HIGHLIGHTS

Washington (CNN) -- An escalating national debate on federal deficits and government spending focused Sunday on the upcoming deadline for Congress to increase the amount of money that the United States can borrow.

Treasury Secretary Tim Geithner said congressional leaders told President Barack Obama last week that they will raise the federal debt ceiling when it reaches its limit, which is expected to happen sometime within the next 10 weeks.

"Congress will raise the debt ceiling," Geithner told ABC's "This Week" program. "I sat there with them and they said, 'We recognize we have to do this.' "

Leaders of both parties realize "there's no alternative" to increasing the amount of money the federal government can borrow, Geithner said.

However, legislators favored by the conservative Tea Party movement said their support for raising the debt ceiling would require accompanying changes in how the government operates in order to hold down future spending.

Rep. Allen West, R-Florida, proposed a balanced budget amendment, caps on government spending limits and a trigger mechanism that requires spending cuts if the budget deficit gets too big.

"If you're going to ask this Congress to raise the debt ceiling, there's got to be something structural on the spending side," added Rep. Joe Walsh, R-Illinois, on ABC.

Obama and congressional Democrats oppose such a direct linkage, though the White House concedes that there needs to be simultaneous steps to reduce mounting deficits and the national debt. They want the vote on the debt ceiling to be "clean" as a stand-alone measure, both to focus the debate on that issue alone and to avoid a precedent for future votes.

Geithner warned that the world was watching how the U.S. handles its deficit and debt issue. Allowing the debt ceiling debate to become overtly political and subject to brinkmanship demands would send the wrong signal, he said, while actually failing to extend the debt limit would be economically devastating and make the recent recession look "tame."

"If you take it too close to the edge, then they'll say, 'What are they doing?' " Geithner noted, adding: "There is no responsible person that would take" that kind of risk.

The debate involves broader issues, with Congress also taking up a federal budget for fiscal year 2012, which begins October 1, after passing a spending plan for the rest of the current fiscal year last week that included $38.5 billion in cuts.

A Republican version passed by the House on Friday would cut trillions in spending over the next decade while overhauling the Medicare and Medicaid entitlement programs that provide health care to senior citizens and the poor and disabled. It includes no cuts to military spending, and the tax reforms it proposes are intended to lower rates while eliminating loopholes with an end result of bringing in the same amount of revenue as the current system.

House Budget Committee Chairman Paul Ryan , R-Wisconsin, who authored the plan, told the CBS program "Face the Nation" that "we want more tax revenues, but we want to get it by expanding job creation, expanding economic growth" that will be bolstered by a streamlined tax system with lower rates.

Obama and Democrats advocate what they call a balanced approach that would end Bush-era tax cuts for families earning more than $250,000 a year to raise more revenue while also reforming Medicare and Medicaid, and cutting spending, including the military budget.

Battle of the budgets in weekly addresses

"I think you've got to look at both sides of the ledger," Sen Mark Warner, D-Virginia, said on CBS. He is part of the so-called "Gang of Six," a group of three Democratic and three Republican senators who have been privately negotiating a deficit reduction plan based on the report last year of the Bowles-Simpson commission appointed by Obama.

Warner said the group, which has been talking since the commission report came out in December, was getting "very close" to completing its work on a compromise plan that he guaranteed will "make everybody mad" by its comprehensive approach, including once-untouchable proposals such as Social Security reform and defense spending cuts.

"We're looking at a ratio of about $3 in (spending) cuts for every dollar of revenue" raised through tax reforms, Warner said. With spending at an all-time high of about 25% of economic output and revenues at an all-time low of about 15%, "it doesn't take a math wizard to figure out" that formula is unsustainable, he said.

Republican Sen. Rand Paul of Kentucky, a Tea Party-backed newcomer to Washington, argued that the necessary compromise should be about spending alone, rather than any kind of higher taxes.

Rand Paul: Both sides must give in

That brought a quick response from Democratic Rep. Anthony Weiner of New York, who told CNN that "the difference is that when the president and I say let's put everything on the table, we really mean it."

"When people like Sen. Paul say it, they just mean the narrow slice of our budget which is non-defense and some defense discretionary funding," Weiner said.