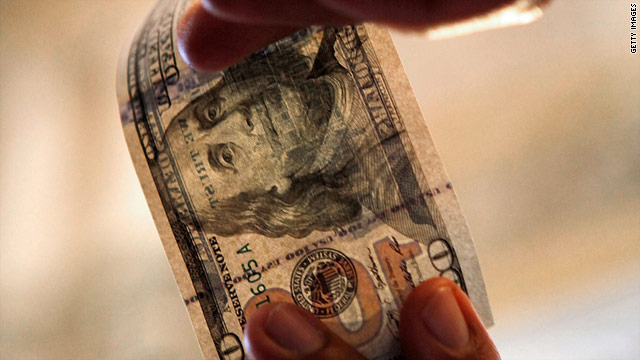 If the government fails to raise the debt ceiling, some experts say the U.S. economy could go into a tailspin.
STORY HIGHLIGHTS

Washington (CNN) -- From the White House to Congress, lawmakers are hashing it out on how to solve the nation's massive debt crisis -- and the negotiations, shall we say, are less than pretty.

President Obama is set to lay out his deficit reduction plan Wednesday night, which is expected to call for rolling back the Bush-era tax cuts for the wealthy, among other things.

So what exactly is the country's debt debate all about?

The U.S. is deeply in the red -- that part we know. What is unknown is whether Congress and the president can agree on an approach to bring the budget back into balance in a hyper-partisan environment.

The bipartisan 2011 budget deal, struck last Friday in order to avert a government shutdown, calls for nearly $39 billion in cuts for the remainder of the fiscal year, which ends in September.

While the White House and House Speaker John Boehner are on board, others in Congress are reluctant to support the compromise when it comes up for a vote later this week.

All sides agree that cutting spending has reached critical mass and entitlement programs such as Medicare, Medicaid and Social Security, which make up a large part of the nation's spending, are getting a hard look.

House Budget Committee Chairman Paul Ryan laid out in his 2012 budget plan last week that would overhaul Medicare and Medicaid government health care programs for the elderly and poor while reforming the tax code to lower rates and eliminate loopholes.

The plan is strongly opposed by the White House and congressional Democrats, who say it protects the wealthy while putting the burden of spending cuts and other reforms on the middle class and poor.

What is the debt ceiling?

How high is the debt limit right now?

Has the debt ceiling ever been reached?

No. But if U.S. borrowing hits the ceiling and lawmakers fail to raise it, Treasury would be prohibited from borrowing more money.

Why should we care?

Because it affects us.

If Congress doesn't raise the debt ceiling by May 16, the United States may have to default on at least some of its debt, which is an unthinkable option since it could cripple world markets and slam the U.S. economy.

"If Congress failed to increase the debt limit, a broad range of government payments would have to be stopped, limited or delayed, including military salaries and retirement benefits, Social Security and Medicare payments, interest on the debt, unemployment benefits and tax refunds," according to Treasury Secretary Timothy Geithner.

Some lawmakers, however, are threatening to vote against an increase in the debt ceiling in the name of fiscal responsibility.

Ultimately, lawmakers may have to raise the ceiling because even if Congress never approves another spending increase or tax cut, the country will not have enough revenue to cover its bills.

If lawmakers fail to raise the ceiling this year, they will have two choices:

They could either cut spending or raise taxes by as much as $738 billion just to cover the period from April 1 through September 30, which is the end of the fiscal year. Or they could acknowledge that the country would be unable to pay what it owes in full and the U.S. could effectively default on some of its obligations.

But both of those options could have negative economic repercussions, according to many experts.

Geithner said that if the debt limit is not increased by May 16, the Treasury would employ a range of extraordinary measures to prevent defaulting on loans.

He's estimated that those measures could only buy roughly eight weeks -- "meaning no headroom to borrow within the limit would be available after about July 8, 2011."