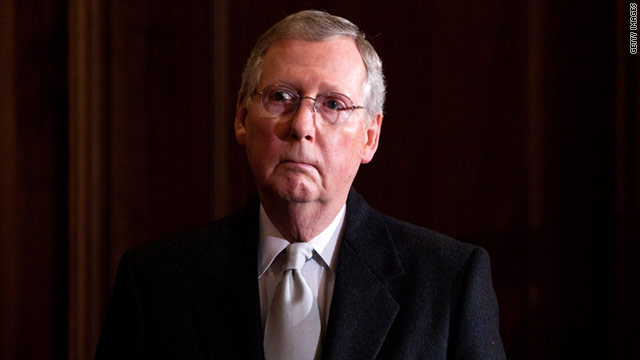 Washington (CNN) -- The top Senate Republican on Tuesday laid out a hard-line negotiating stance on upcoming budget battles, rejecting any tax increases and demanding "significant" reforms in exchange for his vote to raise the debt ceiling.

"We're going to require as a condition for raising the debt ceiling something really important about the debt," Senate Minority Leader Mitch McConnell, R-Kentucky, told reporters.

Congress must reach an agreement on the debt ceiling before the United States reaches its legal borrowing limit of $14.29 trillion.

McConnell said the Treasury Department has indicated the nation would reach its debt ceiling "sometime between Memorial Day and the Fourth of July."

He called for "something real, something measurable" that will begin to reduce the national debt.

McConnell also made clear that he opposes generating more revenue through higher taxes to tackle the deficit and debt problems.

"From my point of view, taxes are not on the table because we don't have a revenue problem, we have a spending problem," McConnell said.

Sessions: 'What we need is numbers'
RELATED TOPICS

"We're only talking about doing this if we can be assured there are guarantees in place that spending doesn't get out of control again," Cantor said of allowing more borrowing by the federal government.

A few minutes after McConnell spoke, Senate Majority Leader Harry Reid, D-Nevada, noted that Republicans and Democrats have widely differing views on how best to strengthen the nation's fiscal situation.

Reid accused Republicans -- including House Budget Committee Chairman Paul Ryan, R-Wisconsin, who has released a 2012 budget proposal -- of seeking to protect the wealthy and their special interests.

"The only thing Republicans fought to protect were the richest of the rich," Reid said of last week's budget negotiations on a spending plan for the rest of the current fiscal year.

"It is clear once again that the two parties' priorities are significantly different," Reid said of Ryan's proposal, adding it would provide no help for the middle class.

Obama, who is presenting his long-term debt reduction plan on Wednesday, should address inequities in the tax code that benefit moneyed interests, Reid said, calling for a halt to subsidies for oil companies and deductions for companies that transfer jobs overseas.

Reid also said additional revenue must be part of any long-range fiscal solution. He didn't give specifics, but Democrats generally favor increasing the tax rate for families earning more than $250,000 a year to the levels of the 1990s, before tax cuts implemented by the Bush administration.

As Washington battles over spending cuts, the Treasury Department reported Tuesday that the deficit for the first six months of the 2011 fiscal year has reached $829.4 billion.

According to the latest monthly figures from Treasury, in March the federal government took in $150.9 billion, but outlays were $339 billion, for a monthly deficit of $188.2 billion.

Sen. Joe Lieberman, an independent from Connecticut who is part of the Democratic caucus, said the deficit issue requires a comprehensive approach in which "everyone is going to have to take some loss."

"We can't keep spending a trillion and a half more every year than we're bringing in, even though it's hard now to say we have to cut these programs," Lieberman said. "If we don't begin to do that, and at some point think about raising taxes, the whole American economy will come close to collapse."