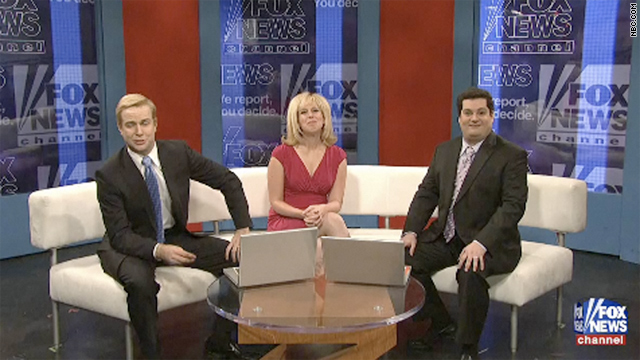 You knew this was coming ...

"Saturday Night Live" took on Fox's morning show "Fox and Friends" this past weekend for its coverage of the possible government shutdown.

The skit began, "You're watching Fox and Friends. Coffee, smiles, fear and terror."

"I'll tell you who I'd send home -- President Obama," anchor Gretchen Carlson, played by Vanessa Bayer, said. The other "anchors" chimed in saying, "there she goes."

The Fox show has been criticized by comedy shows, including The Daily Show, for its less than flattering coverage of the president.

Besides mocking the show's anchors, actress Helen Mirren -- who hosted the show -- appeared as a radical border activist.

It was a long way from her time as "The Queen."

It turns out that if the federal government had shut down, the movie premiere would have been forced to move, The Washington Post's Reliable Source column points out. Ford's Theater receives federal funding.

So that's how they survived sleepless nights

Gawker received a picture from a congressional staffer reportedly showing how the office of Rep. Sam Graves, R-Missouri, survived the all-nighters during the budget crisis.

"A congressional staff member sent us this snapshot from outside Rep. Sam Graves' office, taken around 10:15 p.m. as Congress wrapped up the final budget compromise," the website reports. "Note that we are not -- absolutely not! -- implying that Republican staffers were drunk during the up-to-the-wire negotiations! Just reckless and crazy and dangerously ignorant. Okay, and maybe a little drunk."

Mediaite: How To Interview Donald Trump: The Birther-Debunker's Guide To The Universe

"I saw Donald Trump kind of rising in the polls. Given his behavior, and the spectacle of the last couple weeks, I hope he keeps on rising. ... There is zero chance that Donald Trump would ever be hired by the American people to do this job" -- White House senior adviser David Plouffe on CNN's "State of the Union"

"It is more than a little depressing that Boehner -- who embodies the regressive, lobbyist-driven politics that Obama was supposed to banish -- is now Obama's political wingman" -- The Daily Beast's Peter Beinart

"On the one hand, this is the single largest year-to-year cut in the federal budget, frankly in the history of America in absolute terms. ... Probably for that we all deserve medals -- the entire Congress. Relative to the size of the problem, it is not even a rounding error. In that case we probably all deserve to be tarred and feathered" -- Republican Rep. Jeb Hensarling on CNN's "State of the Union"