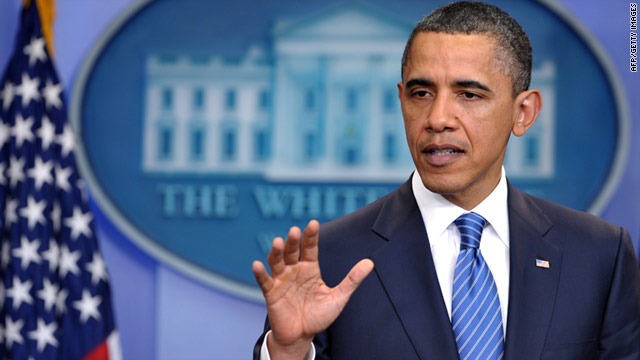 Washington (CNN) -- A fourth White House meeting in 48 hours between President Barack Obama and congressional leaders failed to reach agreement Thursday night on a spending plan for the rest of the current fiscal year, increasing chances for a partial government shutdown to begin just over 24 hours later.

"We made some progress today," Obama told reporters in brief remarks, saying differences had been narrowed and staff members would work through the night to try to reach agreement on the few remaining "difficult issues." He provided no details.

"I'm not prepared to express wild optimism," Obama said. "I think we are further along today than we were yesterday."

Obama added that he told Reid and Boehner he wanted an answer Friday morning on whether a deal would get reached, and the White House announced that Obama's planned trip on Friday to Indiana to promote clean energy had been called off.

10 ways shutdown could ruin your day

In their own joint statement, Reid and Boehner also said they had narrowed the issues but lacked an agreement. They pledged to work through the night to resolve the remaining differences, but provided no details.

What happens if government shuts down?

Reid said later on the Senate floor that despite all the negotiations so far, "we keep never quite getting to the finish line" of an agreement.

"I'm not really confident but I'm very, very hopeful" that a deal can reached on Friday, Reid said.

If Congress and the White House cannot reach an agreement by midnight Friday, when the current spending authorization measure expires, parts of the government will close down. That means 800,000 government workers will be furloughed and a range of government services will halt, though essential services such as law enforcement will continue to function.

Obama noted the mechanism of shutting down government operations have started in case a deal proves elusive, which he said would hurt federal workers, people who rely on government services and the nation's economic recovery.

"For us to go backwards because Washington couldn't get its act together is unacceptable," Obama said.

It was the second meeting on Thursday involving Obama, Reid and Boehner, after they held similar talks on Tuesday and Wednesday. After a midday meeting Thursday, further negotiations among congressional aides took place throughout the afternoon before Reid and Boehner returned to the White House for more talks with Obama, this time joined by Biden.

In an exclusive interview with CNN before the evening meeting, Reid put the chances of such a shutdown at 50-50 and said Democrats had agreed to all the spending cuts demanded by Republicans that they could.

"Enough is enough," he said.

Podcast: What happens in a shutdown?

Also Thursday, the GOP-controlled House of Representatives passed a short-term government spending bill that would delay the impending shutdown by one additional week.

The measure, which passed 247-181 in a largely party-line vote, funds the Pentagon for the remainder of the current fiscal year. It would also slash federal spending by another $12 billion and includes so-called "policy riders" that stipulate political and ideological restrictions, such as no government funding for Planned Parenthood.

However, Reid declared the short-term extension a "nonstarter," and the White House promised a veto if it reached Obama's desk.

The president "does not believe that we should sign another short-term measure that carries within it a lot of policy implications in order to kick this can down the road," Jay Carney, White House press secretary, said. "It is simply no way to do business."

Top legislators on both sides of the aisle seemed increasingly resigned to the prospect of a shutdown as the day dragged on.

Congressional staffers began receiving their furlough notices earlier in the day. Employees deemed "essential" during a shutdown would still be able to work; those considered "nonessential" would not.

"It looks like it's headed" toward a shutdown, Reid said on the Senate floor. "The numbers are basically there, but I am not as nearly as optimistic -- and that's an understatement -- as I was" on Wednesday night after a previous meeting with Obama and Boehner.

Reid said the differences between the two parties "are no longer on how much savings we will get on government spending." Instead, he insisted, the major obstacle at this point is Republicans' insistence on including provisions related to abortion and environmental protection.

Republicans are, among other things, pushing to strip all funding from Planned Parenthood as well as trying to prevent the Environmental Protection Agency from regulating greenhouse gas emissions.

"A small group with an extreme political agenda is forcing a shutdown of the United States government over a dangerous proposal that would bar women from getting the lifesaving health care they need," said Planned Parenthood President Cecile Richards.

What would be shut down?

Reid said that "the only thing holding up an agreement is ideology."

Boehner disagreed with Reid's assessment of the numbers, declaring that there is "no agreement on numbers and no agreement on the underlying policies."

He also insisted that "there is absolutely no policy reason for the Senate not to follow the House in taking these responsible steps to support our troops and keep the government open."

Republican leaders are "confident that those Democrats who believe it is important to fund our troops and make real spending cuts will prevail upon Sen. Reid and our commander in chief to keep the government from shutting down," Boehner said.

In response, Reid said he was starting to question whether Boehner really wanted a deal.

A Democratic source told CNN on Thursday morning that there had been a tentative agreement to cut $34.5 billion in spending for the rest of the fiscal year, which ends September 30. Republican sources, however, said that was incorrect and insisted that no agreement had been reached on a number.

Parks would suffer in a shutdown

Earlier this year, the House passed a bill that included $61 billion in cuts from current spending levels, but the measure was rejected by the Democratic-controlled Senate. Two previous extensions of the government spending resolution have included $10 billion in cuts.

Republicans, under pressure from the Tea Party movement to make deep cuts that would reduce the size of government, blame Democrats for failing to pass a fiscal year 2011 budget last year when they controlled both congressional chambers.

They also have said that Obama and his party are ignoring the peril of the rising federal deficits and national debt.

Democrats contend the $61 billion in spending cuts in the House bill would harm the economic recovery and slash education and innovation programs essential for continued growth.

How a shutdown would affect Dems, GOP
RELATED TOPICS

Obama and Reid insist that Democrats have agreed to more than 50% of the spending cuts sought by Republicans, which they said should be sufficient for a compromise on an issue that has little overall effect on the deficit and debt issues.

Republicans note that reducing the spending in a mandatory program for one year doesn't prevent the amount from returning to its original level the following year.

If there is a shutdown, the Internal Revenue Service will stop processing paper tax returns, the Small Business Administration will stop making loans and federal home loan guarantees will be put on hold, among other things.

U.S. troops would be paid through Friday, but after then, paychecks to members of the military, including those in war zones, would stop. The National Institutes of Health would stop accepting new patients and would put clinical trials on hold.

According to the U.S. Office of Personnel Management, most federal workers paid with funds appropriated by Congress would go on temporary furlough in the event of a shutdown.

Congress would decide if furloughed workers get paid for the time missed when the shutdown ends, according to OPM. Health benefits continue if the shutdown lasts for less than a year, it said.

A Justice Department representative said Wednesday on condition of not being identified that "critical national security, law enforcement and prison operations" would continue in the event of a shutdown.

"All FBI personnel in the field will continue to work, and the department will be ready to respond to any and all contingencies that might arise during this time," the Justice representative said. However, some functions including civil litigation, outreach to crime victims and grant processing would be stopped or curtailed, the representative said.