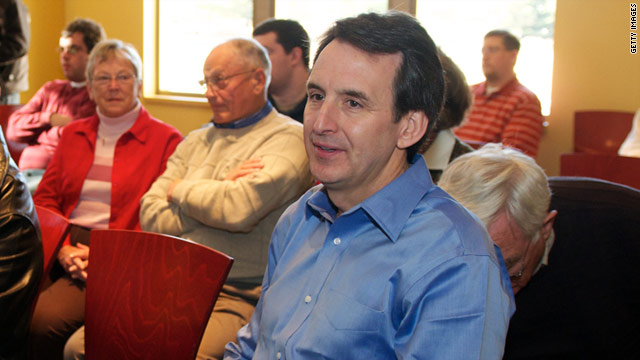 Talking to the young'uns

Former Minnesota Gov. Tim Pawlenty, widely believed to be a 2012 Republican presidential contender, is making the rounds in key early voting states like Iowa -- and trying his hand at pop culture 101 to win over a growing voting bloc, the Des Moines Register reports.

"I think what the younger voters have figured out is that this is a broken relationship (with Obama)," Pawlenty said at the Iowa Federation of College Republicans dinner in Des Moines, Iowa. "If this was a Lady Gaga song, the relationship between the youth vote and Barack Obama would be 'Bad Romance.' "

"We may not in this room have tiger blood like he does, but we've got something else in common with him. There's going to be a lot of winning on the Republican side in 2012."

Former first lady Laura Bush dishes to The New York Times about life after the White House -- including the pressing issues now weighing on her husband's mind.

"He's always worried about our small lake that is stocked with bass, because he loves to fish. There's always some concern: It's too hot. It's too cold. Are the fish not getting enough feed? That's what he worries about."

"To be fair, Hillary voters never fell in love with Obama, they just fell in line. Their relationship is less like a Julia Roberts chick flick and more like a Bengali arranged marriage." -- Los Angeles Times' John Phillips

"What bothers me is that (Donald Trump is) getting so much attention for this fake presidential run. I know Trump thinks any publicity is good publicity -- the same way he apparently thinks any hair is good hair." -- Seth Meyers on "Saturday Night Live"

"TLC will start airing new episodes of Kate Plus 8 starting this Monday. And they are going to keep airing them until Gadhafi agrees to step down from power." -- Jimmy Fallon on "Late Night"

"President Obama called Vice President Joe Biden into the Oval Office today to get his opinion and his advice on the U.S. involvement in Libya. Then Obama said, 'April Fools' Day!'" -- Jay Leno on "The Tonight Show"