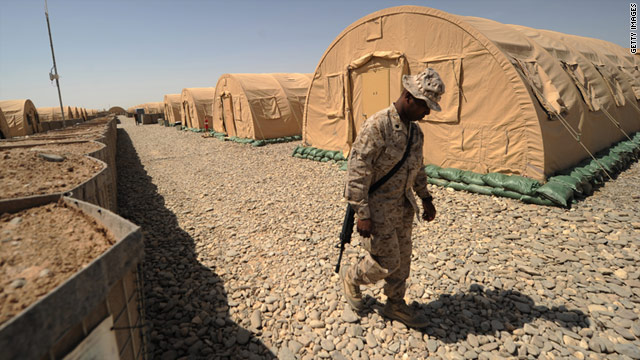 A U.S. Marine walks between tents at Forward Operating Base Delaram in southern Afghanistan on April 4.
STORY HIGHLIGHTS

Washington (CNN) -- The Department of Defense says that if the government shuts down for an extended period, troops including those fighting in Afghanistan and Iraq will not be paid on time, according to a senior defense official.

The threat adds to the pressure the Pentagon is trying to put on Congress to pass a proper defense budget, rather than the continuing resolutions it has operated under for the last few months. The resolutions fund the Department of Defense at a lower rate.

"If the continuing resolution expires, we have no money except for activities we can say are exempt as permissible by law, on the grounds of national security," the senior defense official said. He is unnamed because he wasn't authorized to speak on the record.

Officials insist the operations -- including the two wars, Libya and Japan -- would be not affected but it would certainly impact military families.

If the federal government shuts down, "you could have forces deployed in the field, with their families back home, and no one's getting paid. And that could be an issue," the defense official said.

If a shutdown were to last beyond the next pay period of April 15, the official says U.S. troops would not get paid on time.

This is a stark contrast to 1995, when military personnel continued to work and were paid. The official says unless Congress and the president specifically reach agreement otherwise, "some troops who expect a paycheck might not get it on time." The official says troops would receive back pay when funding is restored.

The official says the Pentagon is actively planning for contingencies, but "we'll know a lot more in the next 24 hours," when the president and congressional leaders meet to discuss the budget impasse.

"The fact that our armed forces, including troops in combat, would not be paid during a government shutdown underscores the seriousness of this issue. That's one of the many reasons the House has done its work and passed a funding bill for the remainder of the year," said Michael Steel, spokesman for House Majority Leader John Boehner, R-Ohio.

The chairman of the House Armed Services said the warning is "getting ahead of ourselves," saying he hoped the budget impasse is resolved soon.

"They would get the pay, the problem is they wouldn't get it when they plan on getting it," Chairman Buck McKeon, R-California, said on Monday. "I don't even want to contemplate that because to think we would have our young men and women over on the front lines putting their lives on the line, with their families at home with bills to pay that don't get their paycheck, I just think that's really going too far. I think we are mature enough to get this thing fixed."

As to who actually comes to work in the event of a shutdown, the official says all operations would be broken down into two categories: exempt and nonexempt. Exempt activities include any operations dealing with national security and safety of human life, and would continue to function as normal. That includes anything to do with fighting the wars, long-range planning and deployments among others.

Nonexempt operations could be commissaries, certain supply depots and nonessential maintenance. Certain contractors will continue to operate because the Department of Defense has already paid them.

The Pentagon is in the final stages of figuring out what is exempt and nonexempt from a shutdown, according to two Pentagon officials, who were not authorized to speak on the record.

"The guidelines will go out to each of the services and will be pretty broad. It will be up to managers and commanders to give detail to the orders, and decide which of their personnel is exempt," the official said. Managers will be prevented from simply declaring that all their manpower and operations should keep functioning without pay, the official said: "At any level of the chain of command, you will expect challenges to decisions made as to what is exempt and nonexempt."

While troops and civilian workers would not be paid during an extended shutdown, all troops and certain civilians will still have to work, as part of national security operations. The troops are guaranteed back pay if they miss any checks. The civilians' back pay depends on congressional authorization.

The next pay date is April 15, when troops and civilians will at the very least be paid all the money they earned through April 8. After April 8, there would be no pay without a federal budget.