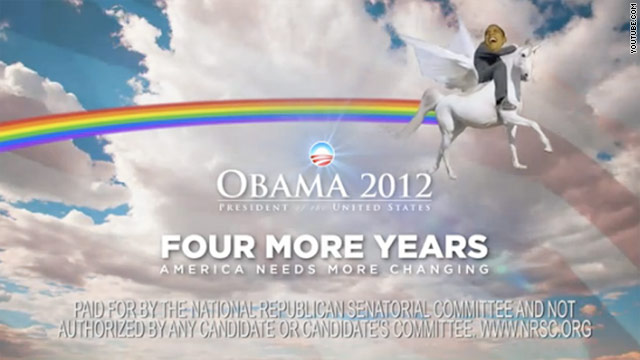 President Barack Obama should be re-elected in 2012, according to a spoof re-election ad paid for by the National Republican Senatorial Committee.

"Today, we celebrate a president that brought Americans together (images then appear of Tea Party protests) ... celebrate the end to our dependence on American energy (image showing gas prices, referring to U.S. dependence on foreign oil).

The ad ends, "President Obama -- four more years" with an image of the president riding a unicorn across a rainbow.

Meghan McCain, who could have become America's first daughter had things gone the GOP's way three years ago, is lashing out at "Game Change," an HBO adaptation of a book that chronicles the 2008 presidential election, including the campaign of her father -- Sen John McCain, R-Arizona.

"I read parts of 'Game Change,' but couldn't get through the whole book," she wrote in her Daily Beast column. "What's weird about this is it will always be a part of my family's narrative and now Hollywood is upping the ante. HBO is turning 'Game Change' into a miniseries, and they've cast Ed Harris as my dad."

Mediaite: Video Of Rep. Sean Duffy Complaining About His $174,000 Salary Hits Internet, Wisconsin GOP Tries To Get It Off

"According to a poll just released today, President Obama's approval rating is at an all-time low. He's so unpopular right now, the people in Kenya are accusing him of being born in the United States." -- Jay Leno

"Face it -- at this point car alarms are like Glenn Beck: annoying, pointless and everyone's finally learned to ignore them" -- Bill Maher