Geraldine Ferraro in her own words

By Allison Gilbert, Special to CNN 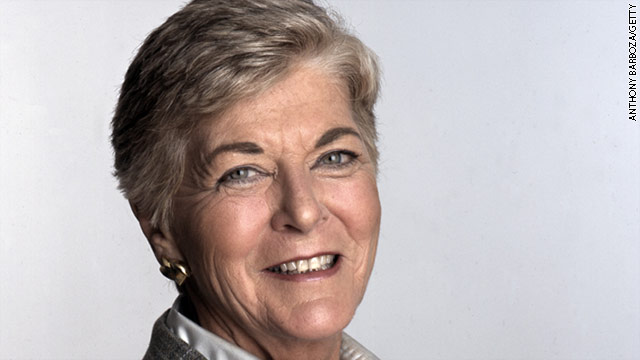 Geraldine Ferraro was remembered at services in New York on Thursday.
STORY HIGHLIGHTS

Editor's note: Allison Gilbert, who also produces packages and books guests for CNN, is an author and founder of Parentless Parents. You can read her entire interview with Ferraro in her book "Always Too Soon: Voices of Support for Those Who Have Lost Both Parents."

We met during the writing of my 2006 book "Always Too Soon," which chronicles the stories of prominent people who have lost both parents. Ferraro lost her father when she was 8 years old.

She was exceptionally generous with me, and never wavered in her enthusiasm for my project. In the most personal way imaginable, her outlook changed my life.

Ferraro talked about the death of her father and how it shaped her life and her nomination for U.S. vice president. During our time together, she discussed other private matters, including her diagnosis of multiple myeloma -- the blood disease that ultimately killed her -- and how she'd like to be buried and remembered.

Below are my favorite quotes, in Geraldine Ferraro's own words:

On being the first female nominee for vice president on a major party ticket:

"I really miss my father, but I don't think I would be the person I am today if he had lived. I don't think I would have been as strong or resourceful. I would have stayed in Newburgh, New York, and married somebody from West Point. I would not have become a prosecutor. I would not have been a congresswoman. I certainly never would have run for vice president of the United States. So, my father's dying, in a strange way, shows that good can come out of horrible things. My father's death made me stronger. When I got the nomination, I couldn't help but think of my father. He would have been stunned and proud."

On losing the nomination:

"Nobody had greater confidence in me than my mother. She always said, "My daughter is going to be famous." When Walter Mondale asked me to be his running mate, my mother was the first person I called after my husband. She was so excited. She thought that I could do anything. She was probably the only person in the country who was surprised that we didn't win."

On her mother's illness and her friendship with former Secretary of State Madeleine Albright:

"In the summer of 1985, I was out on Fire Island for a weekend with Madeleine Albright, who was my foreign policy adviser on the 1984 campaign. We had become good friends. I got a call from one of my mother's neighbors at 2 o'clock in the morning. She said, 'Your mother is at the hospital. She's having trouble breathing.' Madeleine said, 'I'm going with you.' We went across the water in my son's boat. When we got to the hospital, the doctor told me that it was emphysema."

"As for my father, I have his picture on my nightstand. I've also kept his American flag. He used to fly it constantly. It is small and tattered, but it's his. Maybe I'll have them bury me with it."

On her cancer diagnosis and what she wants for her daughters:

"My diagnosis of multiple myeloma eight years ago gave me a sudden awareness of mortality. They told me I had three to five years to live. At the time I thought, if I live until the end of that prognosis, 68 will be my last birthday. What do I want to do with my remaining five years? My children have stepped in. At a certain point, as I found with my mother, you go from taking care of your children to having them take care of you. You hope that when you bury a parent, whatever strands you got from them, you'll transfer to your children. You'll bring your children up knowing about your relationship with your own parents. I think that's important to do.

It's important to recognize the inevitable -- that you will someday be without both parents. That's the cycle of life. So while your parents are alive, enjoy them. Then, when you lose them, you can say you don't have regrets. I want my children to be able to grieve, and then ultimately accept a time when they will not have my husband and me."

It has been nearly six years since Geraldine Ferraro and I sat down for that interview, and since then, her openheartedness continually stunned me. Without ego or demand for compensation, she even agreed to appear on a panel with me about my book at the 92Y in New York City. Her participation was yet another example of her outsized willingness to selflessly lend her celebrity to my work. The huge crowd that night certainly wasn't there for me.

After she died this weekend, I searched for an e-mail I remember her writing to me after we did that event together at the Y. It made me choke up when I reread it:

"Don't thank me. Again, it was my pleasure to help. I must say, I thought of you yesterday. My son and his wife were finishing their floors in their home and had to be out for the night. They called and asked if they could stay with us last night -- we of course were delighted. And when Samantha the 5-year-old came in with her uniform smeared with blue paint and weird globs of paste, I took her clothes and did my Mrs. Clean thing. She thought it was quite funny. Will she remember me for combing her hair? Or will our five little girls remember Papa sending them flowers each Valentine's Day?