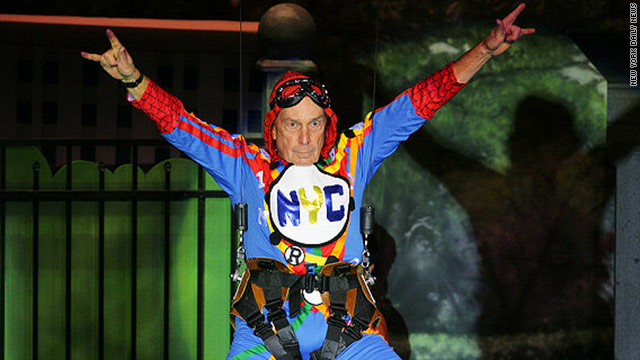 New York City Michael Bloomberg dusted off his acting chops by joining the cast of Broadway musical hits "Mama Mia," "Hair," and "The Little Mermaid" among other shows for the Inner Circle charity dinner, the New York Post reports.

The dinner is an annual roast of politicians and reporters covering City Hall.

Wearing bell-bottoms, he performed "Mayor Mia!" and even took to the skies as Mary Poppins. Hizzoner also got into a skintight suit appearing as Spiderman.

A movie where everybody knows his name

The next coffee table book

Dan Sinker, the man made famous by his satirical @MayorEmanuel Twitter account, is getting a book deal.

Scribner, part of Simon & Schuster, is set to publish the tweets in book form, the Chicago Tribune reports

"Newt Gingrich was so discombobulated (on his Libya response) this week, he made a pass at his current wife" -- Bill Maher