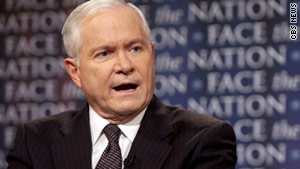 Washington (CNN) -- Presidential leadership or kowtowing to allies? Abuse of power or decisive action in the face of imminent catastrophe?

Supporters and critics used Sunday talk shows to debate President Barack Obama's Libya policy on Sunday, the day before the president addresses the nation on the issue.

The speech Monday night follows calls from all quarters for Obama to clarify the reason he sent U.S. forces to head the U.N.-authorized military mission intended to prevent Libyan leader Moammar Gadhafi from unleashing his military on his own people.

Obama has said that U.S. policy is the ouster of Gadhafi. However, the mandate of the military coalition is only to enforce a no-fly zone and arms embargo in Libya while taking other necessary steps to protect civilians.

Democratic Sen. Carl Levin of Michigan, chairman of the Armed Services Committee, explained on CNN's "State of the Union" that the mission's goal is to give the Libyan people the political freedom to oust Gadhafi.

"We're part of an international coalition, which has been supported now by U.N. resolution with the support of Arab countries, to prevent the slaughter of civilians in Libya," Levin said, adding: "It's going to take the people of Libya to remove their dictator with the help of economic sanctions that the world has put in place."

"There is no perfect option when one is looking at a situation like this," Clinton said on the ABC program "This Week." "I think that the president ordered the best available option. The United States worked with the international community to make sure that there was authorization to do what we have helped to accomplish."

Both Clinton and Levin emphasized that the international support was essential to avoid any perception or accusation that the United States -- already engaged in wars in Iraq and Afghanistan -- was unilaterally committing military forces in a third Muslim country.

"The secret to success is a coalition," Levin told CNN, advocating an "international decision where a unilateral decision could have significant downsides."

Former House Speaker Newt Gingrich, who is expected to announce his candidacy soon for the Republican presidential nomination, challenged such an approach, telling "Fox News Sunday" he wants Obama's speech to be "dramatically clearer than he has been up until now."

Despite his tough rhetoric, Gingrich made clear he opposes sending any U.S. ground troops to Libya -- a position also held by Obama.

"Once you engage air power, you should use the air power in its most effective way," Gingrich said. "You don't need to send in ground forces."

Sen. Richard Lugar of Indiana, the ranking Republican on the Foreign Relations Committee, criticized a lack of congressional debate before Obama committed military forces to the Libyan mission.

"There should have been a plan as to what our objectives were, a debate, before we committed armed resources," Lugar told the NBC program "Meet the Press," later adding: "I don't believe we should be engaged in the Libyan civil war. I think the Libyans are going to have to work that out."

Obama has said the U.S. role in the Libyan mission will diminish once NATO takes over control and command, which could start happening as soon as Monday. However, Gates made clear that even in a diminished role, U.S. forces will still be involved in the mission as long as it continues.

"As long as there is a no-fly zone and we have some unique capabilities to bring to bear -- for example, intelligence, surveillance and reconnaissance, some tanking aviation -- we will continue to have a presence," he said on ABC.

So far, he said, the military mission was proceeding well.

"I would say, for all practical purposes, the implementation of the no-fly zone is complete," Gates said. "Now it will need to be sustained, but it can be sustained with a lot less effort than what it took to set it up."

Asked if there was a problem between the military mission's limited goal of civilian protection and Obama's stated policy objective of ousting Gadhafi, both Gates and Clinton said no.

"You don't, in a military campaign, set as a mission or a goal something you are not sure you can achieve," Gates told the CBS program "Face the Nation." "And as we've learned over the past number of years, regime change is very complicated and can be very expensive and can take a long time. So I think the key here was establishing a military mission that was achievable, was achievable in a limited period of time and could be sustained."

On the same program, Clinton noted how former Serbian leader Slobodan Milosevic remained in power despite mounting internal and external pressure for his ouster that ended with Milosevic dying while on trial in the international war crimes court. She likened that situation to Gadhafi today.

"It took a while for Milosevic to leave, but you could see his days were numbered even though he wasn't yet out of office," Clinton said.

Gates joked on CBS that he "wouldn't be hanging any new pictures" if he were Gadhafi, then noted that there are several possible scenarios for the Libyan leader's ouster.

"His military can turn, we could see elements of his military turning, deciding this is a no-win proposition, the families splitting, I mean any number of possibilities are out there, particularly as long as the international pressure continues, and those around him see no future in staying with him," Gates said.

On the same program, Gates also said that Gadhafi is placing bodies of people his regime has killed at the sites of some missile strikes by the U.S.-led coalition.

Gadhafi has claimed that coalition missile attacks have killed civilians, and some NATO members and Arab nations responded with concern that the Libyan military mission might exceed the intent of the U.N. Security Council resolution that authorized it.

"The truth of the matter is we have trouble coming up with proof of any civilian casualties that we have been responsible for," Gates told CBS. "But we do have a lot of intelligence reporting about Gadhafi taking the bodies of the people he's killed and putting them at the sites where we've attacked."

Asked how often it has happened, Gates replied: "We have a number of reports of that."

A senior defense official told CNN on Sunday that the U.S. military has information gleaned from intelligence sources that Gadhafi has tasked his aides to search morgues and hospitals for dead bodies to be posed as civilian casualties.

NATO ambassadors on Sunday agreed to rules of engagement for coalition forces to follow once the alliance takes over the Libyan mission. A key question is how robust the NATO-led forces will be in attacking Libyan ground forces to protect civilians.

"The people of Libya can remove their dictator, but we are not the ones to remove him," Levin said. "We are the ones that is part of an international coalition that are going to prevent him from massacring his own people."

Others called for a more robust international role.

"I think we do need to consider arming the rebels and let them -- with anti-tank weapons and anti-aircraft weapons -- let them impose their own no-fly zone," former National Security Adviser Stephen Hadley said on CNN. "In the end of the day, how this ends is when the Libyan people can overthrow the tyrant. That's the narrative we want to establish."

Lieberman, an independent who caucuses with the Democrats, said on Fox that the United States had chosen a side in Libya by joining the international coalition, "and it's the right side."

"We ought to be open about it," Lieberman said. "We are taking a side of the freedom fighters in Libya against one of the most totalitarian regimes that has ever existed in the world, which is Gadhafi's. And in the end of this, Gadhafi has to go, one way or the other."