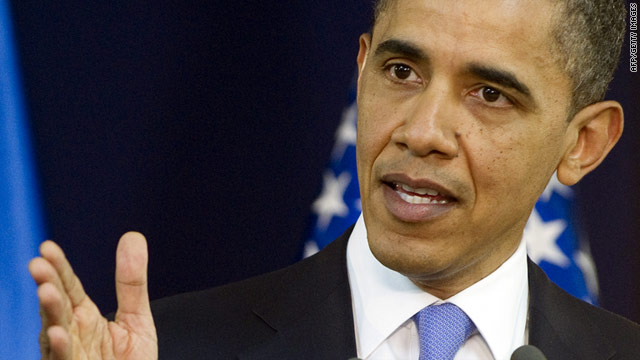 In a Univision-sponsored town hall meeting with Hispanic students and educators at Bell Multicultural High School in Washington, the president said to out-educate and out-innovate the global competition, the Latino community must play a key role in the future.

"Our workforce is going to be more diverse; it is going to be, to a large percentage, Latino. And if our young people are not getting the kind of education they need, we won't succeed as a nation," Obama said.

With several students and parents asking questions about immigration and deportations, Obama said the answer wouldn't be overnight. He hoped the DREAM Act, which would give kids who have grown up in the United States an opportunity to earn citizenship despite their family's immigration status, would be passed in the future.

"We didn't get it passed this time, but I don't want young people to be giving up because if people in the past had given up, we probably wouldn't have women's rights, we wouldn't have civil rights. So many changes that we've made had to do with young people being willing to struggle and fight to make sure that their voices are heard," said Obama.

Carrie Cofer, an English teacher at Lincoln-West High School in Cleveland, says one challenge she faces with her Hispanic students is that they haven't been in the United States long enough to become proficient in English.

Although they only read at the "first-grade, or second-grade level," Cofer and other teachers are supposed to teach them the material they will need to pass state-mandated tests in order to graduate from high school and possibly attend college.

It doesn't help that many of the students don't speak English at home. "They don't have the skills because they don't practice except in the classroom," she said.

Obama said that strong programs, including both bilingual education and immersion programs, are key to making sure bilingual students keep up with their studies while becoming fluent in English. He said that it's up to both schools and parents.

"We have schools that do it very well; there are some schools that don't do it as well. We want to lift up those models that do it well," the president said. "And parents should be demanding and insisting that even if your child is not a native English speaker, there is no reason why they can't succeed in school, and schools have an obligation to make sure that those children are provided for. They have rights just like everybody else."

Latino students make up over 20% of the pre-kindergarten-through-high-school students in the United States, Secretary of the Education Arne Duncan said in a conference call with reporters last week. "These students face real and growing challenges that we have to address."

Duncan said that only about half of all Latino students earn their high school diploma on time, and only one in eight end up with a bachelor's degree.

The problems faced by Latinos in high school are unique, said Juan Sepulveda of the White House Initiative on Educational Excellence for Hispanics.

"We have a small percentage of the population that has a college degree," said Sepulveda. "Even if you throw in community college degrees, we only get up to 19%."

Sepulveda said these students are often the first in their family to go to college, suggesting school officials need to target parents to make sure they understand what courses their children need to take to get into college and how student loans work.