Political Circus: Even presidents get locked out 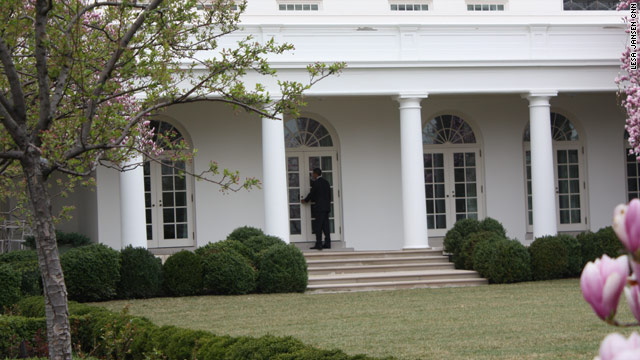 President Obama found himself locked out of the White House on Wednesday.
STORY HIGHLIGHTS
RELATED TOPICS

Is someone trying to tell you something?

You know that paranoid fantasy that you'll get back to your job from vacation and find out they've changed the lock on your office? Well, it wasn't quite that bad for President Obama, but almost, CNN White House Producer Lesa Jansen writes.

Arriving back from a five-day trip to Latin America, the president and first family exited Marine One. Obama then walked along the White House colonnade, all the while being photographed.

And then came the lockout.

"The problem was apparently somebody didn't tell the staff that the president was coming back to work. The doors were locked. The commander in chief didn't miss a beat. He nonchalantly turned and walked to another set of doors partially obscured by some flowering spring bushes," Jansen reports.

And here former President George W. Bush thought he was embarrassed when he tried to open a locked door after a press conference in Beijing in 2005.

And the role of John McCain goes to ...

Actor Ed Harris, best known for his work in movies like "The Hours" and "Gone Baby Gone," is set to play the 2008 Republican presidential candidate in the HBO movie "Game Change" -- based on the 2009 book that chronicles the last presidential election.

Huffington Post: Newt Gingrich Attempts To Clarify His Position On Libya But, Wow, So Confusing!

AOL News: Nation of Islam Looks to UFOs to Save the World

The Guardian: Nicolas Sarkozy, the murderer of the Princess of Cleves

"I mean I just learned the word 'bling' about a month ago. ... Whenever you learn a new word, you have to use it four or five times so it gets fixed in your head, and so I've used it, probably imperfectly from time to time, but I've used it." -- Former Defense Secretary Donald Rumsfeld, to POLITICO

"I'm a boot guy. That's all I wear. Not when I go to the beach though. I'll wear sandals. Or I go barefoot because it feels good." -- Florida Gov. Rick Scott to the St. Petersburg Times