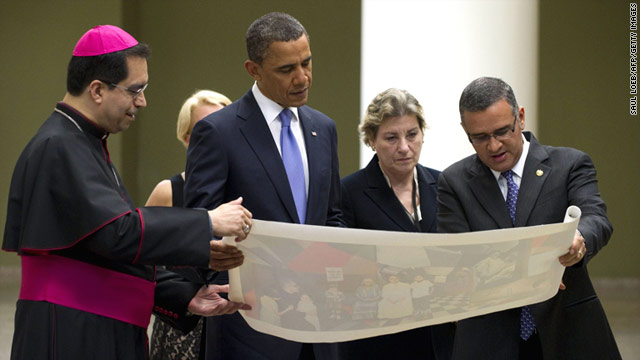 The president was scheduled to depart San Salvador for Andrews Air Force Base at 3:30 p.m. Wednesday after visiting San Salvador's Metropolitan Cathedral to see a famous tomb and touring the nearby San Andres Mayan ruins.

Instead, the White House moved the cathedral visit to Tuesday evening, and canceled the tour of the ruins.

The president will conduct a National Security Council meeting from his San Salvador hotel Wednesday morning before leaving the country at 1 p.m.

"It's logistical," said Tommy Vietor, National Security Council spokesman. "He's doing a call in the a.m. with his national security team, and thus will not have time to visit the ruins."

When addressing reporters in a joint press conference, Salvadoran President Mauricio Fuentes joked to Obama, "Enjoy the few hours you are here."

He added if Obama had stayed longer, he would have enjoyed the nation's beaches, which he described as some of the "best in the region."

President George W. Bush was criticized by many Salvadorans as well for only staying in the country for a few hours during his 2002 trip.