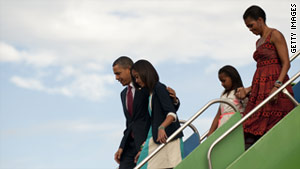 President Obama arrives in Brazil on Saturday with his family for a meeting with President Dilma Vana Rousseff.
STORY HIGHLIGHTS

Brasilia, Brazil (CNN) -- U.S. President Barack Obama defended his decision to authorize U.S. involvement in the military action in Libya by casting himself as a reluctant warrior, saying he and other key U.S. allies had no choice but to act because of fears that Moammar Gadhafi was planning to kill more of his own people.

"I want the American people to know that the use of force is not our first choice and it's not a choice that I make lightly," Obama said. "But we cannot stand idly by when a tyrant tells his people that there will be no mercy, and his forces step up their assaults on cities like Benghazi and Misrata, where innocent men and women face brutality and death at the hands of their own government."

Obama added pointedly: "Actions have consequences, and the writ of the international community must be enforced. That is the cause of this coalition."

Obama spoke to reporters here in Brazil shortly after U.S. cruise missiles were launched against targets in Libya. Between trade talks, he got a phone update from U.S. Secretary of State Hillary Clinton, who was in Paris meeting with French President Nicolas Sarkozy, British Prime Minister David Cameron and other key allies.

Aides said Obama has no plans to cut short his five-day trip to this region because he has secure communications wherever he goes around the world and is traveling with top aides like National Security Adviser Tom Donilon and Chief of Staff Bill Daley, who can offer face-to-face briefings. Obama will visit Rio on Sunday before heading to Chile and El Salvador later in the week.

In an interesting symbolic twist, Obama authorized U.S. military force from here on the eighth anniversary of the start of the war in Iraq. No doubt with that conflict in mind, Obama sought to address lingering concern around the world about unilateral U.S. military action.

He said he is "deeply aware" of the risks of any military action and repeatedly stressed that key members of the international community have come together to confront Gadhafi in Libya.

"In this effort, the United States is acting with a broad coalition that is committed to enforcing United Nations Security Council Resolution 1973, which calls for the protection of the Libyan people," Obama said. "That coalition met in Paris today to send a unified message, and it brings together many of our European and Arab partners."

A senior U.S. official also emphasized to CNN that Obama is privately planning for the U.S. portion of the military action in Libya to last for only a few days.

"In terms of the heavy kinetic portion of this military action, the president envisions it as lasting days, not weeks," said the senior official, who spoke on the condition of anonymity because he was not authorized to speak publicly about sensitive military planning. "After that we'll take more of a supporting role."

In his public remarks, Obama again and again used the phrase "broad coalition" and also noted that he had carefully consulted with Democratic and Republican leaders in Congress on Friday and aides placed calls to lawmakers on Saturday before the military action was taken.

It was also significant that French planes started the military action on Saturday before the U.S. missiles were launched, as if to underscore Obama's determination to not put his administration's signature all over it.

Mindful of the long deployments for U.S. troops in Iraq and Afghanistan, he also emphasized that he will not use any ground troops in Libya.

"As a part of this effort, the United States will contribute our unique capabilities at the front end of the mission to protect Libyan civilians, and enable the enforcement of a no-fly zone that will be led by our international partners," Obama said. "And as I said yesterday, we will not -- I repeat -- we will not deploy any U.S. troops on the ground."

Obama also carefully framed the military action as an unfortunate consequence of Gadhafi's refusal to stop attacking his own people.

"Even yesterday, the international community offered Moammar Gadhafi the opportunity to pursue an immediate cease-fire, one that stopped the violence against civilians and the advances of Gadhafi's forces," Obama said. "But despite the hollow words of his government, he has ignored that opportunity. His attacks on his own people have continued. His forces have been on the move. And the danger faced by the people of Libya has grown."

It was the second time Saturday that Obama addressed the urgent situation in Libya. Earlier during talks with Brazilian President Dilma Rousseff he had also stressed the broad-based nature of the coalition and his reluctant to take military action.

"The people of Libya must be protected," said Obama. "And in the absence of an immediate end to the violence against civilians, our coalition is prepared to act, and act with urgency."

An initial resolution passed by the United Nations Security Council imposing sanctions against Libya did not stop Gadhafi. Therefore the council passed a second resolution on Thursday night authorizing open-ended military action by member nations, including a no-fly zone over the skies of Libya.

While Brazil abstained on the vote because of its concerns that the resolution was too broad, a coalition of the U.S. and other key allies passed the resolution by a 10-0 margin, leading to French planes firing on Libyan military vehicles on Saturday.

Obama declared that "our consensus was strong and our resolve is clear" coming out of the U.N. debate.