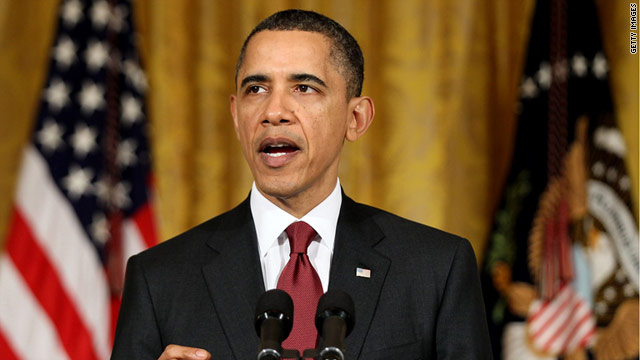 Washington (CNN) -- President Barack Obama is trying to limit the United States' role in enforcing a no-fly zone over Libya to support aircraft only and is very reluctant to commit any offensive U.S. firepower, a senior U.S. official familiar with the military planning discussions said Friday.

"We will provide the unique capabilities that we can bring to bear to stop the violence against civilians, including enabling our European allies and Arab partners to effectively enforce a no-fly zone," the president said in a nationally televised statement about U.S. military action.

Asked about the "unique capabilities" the president talked about contributing, the official said that at least for now, they would not involve combat fighters or bombers but instead would include AWACS, intelligence-gathering drones and other intelligence assets, and refueling and air traffic control.

Defense officials said, "Don't just think of a no-fly zone as American pilots flying American fighter jets." They also emphasized how the U.S. could use radar planes to coordinate air traffic control, to guide fighter jets from other countries to conduct air strikes.

They also talked about signal-jamming aircraft that could disrupt Libyan leader Moammar Gadhafi's ability to communicate with his forces.

The U.S. official said that the U.S. might use cruise missiles and that although the president was very reluctant to commit to any offensive U.S. weapons, he understands that it is likely the U.S. will be called on to do so.

"Nobody is dying to do this, and you can make a fair case we were led there by the Europeans. One piece of advice I can assure you the president has heard many times in recent days that things can easily go wrong and, to a degree, always go wrong," the official said.

"There is not much time for Gadhafi," the official said. "They don't have a whole lot of time here. It is up in the air as to when. But the president is on the record now, and he knows words must have meaning.

"The hope is Gadhafi hears those words, and none of this is necessary," the official stressed. But when asked whether anyone believes that the Libyan leader will pull back from towns recently seized, the official responded: "No, I haven't heard anyone express that view."

A spokesman for GOP Sen. Richard Lugar -- who as ranking member of the Senate Foreign Relations Committee was briefed along with other congressional leaders by the president Friday afternoon at the White House -- said Obama focused on how the U.S. will mostly support enforcement of no-fly zone diplomatically rather than the U.S. enforcing it.

Lugar stands by his statement that for the U.S. to use military assets, Congress needs to act, but the administration is saying it is stopping short of that for now, his spokesman Mark Helmke said.

Separately, a senior Democratic source said the president emphasized the strong feeling that the U.S. should play a supporting role only and that the U.S. has assets that should be brought to bear in this situation.