Obama hopes to see ancestor's birthplace during visit to Ireland 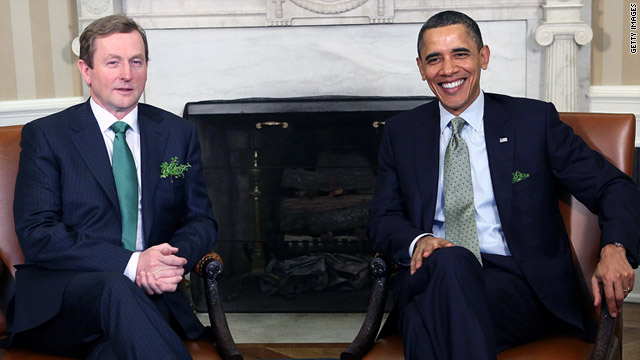 President Obama said during a visit with Prime Minister Enda Kenny that he hopes to visit an ancestor?s birthplace in Ireland.
STORY HIGHLIGHTS

Washington (CNN) -- President Barack Obama announced on Thursday -- St. Patrick's Day -- that he will stop in Ireland in May as a side trip from his state visit to the United Kingdom, and that he hopes to visit the birthplace there of his great-great-great-great-great grandfather.

He made the announcement as he met with the Irish Prime Minister Enda Kenny in the Oval Office. The birthplace is in Moneygall, he said, adding that he also plans to visit "famous sites" in the country.

Obama -- clad in a light green tie and sporting shamrocks emerging from his suit pocket -- stressed the "incredible bond" between the two countries. Beyond the customary comments on his guest's leadership, the president thanked Ireland for its assistance with the U.S. effort in Afghanistan and on issues such as food security, and hailed progress and stability in Northern Ireland.

For his part, Kenny, who wore an even greener tie, said his country will be honored to host Obama in May, and he is even looking forward to a possible round of golf with the president. Obama said he heard the prime minister's game was pretty good so he may need to practice a bit before hitting the links with Kenny.

After the Oval Office meeting, Kenny, Obama and Vice President Joe Biden were scheduled to attend a St. Patrick's Day lunch at the Capitol featuring roast angus beef with wild onion chanterelle compote, followed by an evening reception in the East Room of the White House.

Kenny began the day with a trip to Biden's residence at the Naval Observatory for a breakfast with guests that included U.S. senators, Supreme Court justices, and Cabinet secretaries.

Kenny, who was elected to his post earlier this year, is facing problems at home with high unemployment and a tough economic environment in the wake of the country's near miss with bankruptcy last year. This is his first visit to Washington as prime minister and his first meeting with Obama.