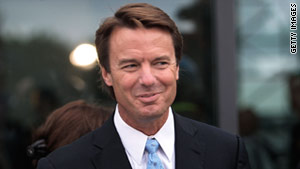 Former U.S. Sen. John Edwards has given a deposition in the lawsuit of his ex-mistress, Rielle Hunter, against his former aide Andrew Young.
STORY HIGHLIGHTS

(CNN) -- A group of media companies on Wednesday asked a North Carolina judge to unseal court documents in a lawsuit involving the John Edwards sex-tape case.

The motion by the media companies, which include CNN, does not seek public release of the sex tape or any intimate photos that might exist.

Instead, it argues that most details in the case already have been made public by the parties themselves, and therefore the motions and depositions so far should be public records as called for under North Carolina law.

Edwards, a former U.S. senator and Democratic vice presidential candidate in 2004, has given a deposition in the lawsuit of his former mistress, Rielle Hunter, against former Edwards aide Andrew Young.

Hunter, who bore a child of Edwards, is suing Young to reclaim materials that she says belong to her, including the alleged sex tape that involves Edwards.

Superior Court Judge Carl Fox previously ordered the motion compelling Edwards to give his deposition, as well as the deposition itself, to be sealed from public disclosure.

"The public interest in Senator Edwards' deposition and the other depositions in this case is significant, while the privacy interests of Senator Edwards and the parties -- who voluntarily participated in events of significant public importance and have widely and openly discussed all of the events underlying this litigation -- are negligible," said the motion by the media companies.

Young was a senior aide to Edwards who originally claimed that Hunter's child was his own in an effort to shield Edwards from having to make the disclosure.

Edwards eventually did acknowledge his paternity. His last public appearance was at the funeral for his wife, Elizabeth Edwards, who passed away last December after a six-year battle with cancer.

Edwards also is under investigation about whether or not he illegally used campaign funds to cover up his affair with Hunter, a campaign videographer.