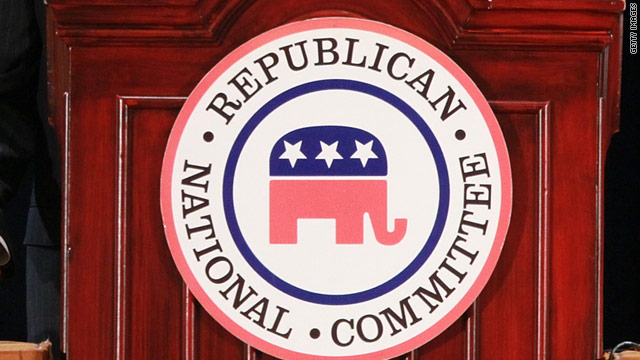 The RNC has been saddled with more than $22 million in debt from the 2010 midterm elections.
STORY HIGHLIGHTS
RELATED TOPICS

Washington (CNN) -- The Republican National Committee is considering sanctioning the GOP presidential primary debates and then selling the broadcast rights to news outlets, two Republicans with knowledge of the idea tell CNN.

The proposal was mentioned last week during a meeting of top RNC officials and a handful of political operatives representing potential GOP presidential candidates.

In February, the RNC disclosed it was saddled with more than $22 million of debt left over from the 2010 midterm elections. At that time, newly elected Chairman Reince Priebus acknowledged the committee has "a lot of work to do" to pay off its obligations so it can focus on raising money for the 2012 presidential election.

It is unclear if it is legal for the RNC to sell the broadcasting rights or whether it would constitute a prohibited political contribution in the eyes of federal law.

Kirsten Kukowski, an RNC spokeswoman, confirmed that the issue was mentioned but added, "There isn't a proposal in front of the RNC to do that."

Larry Noble, an election law attorney with Skadden, Arps, described it as a "novel" concept but also said it raises a "serious question" as to whether it is even "possible under the law" to make such a payment beyond the federal contribution limits. Federal law caps an individual's and a political action committee's annual donation to a national party committee at $30,800.

"It may be that the presidential debates and their coverage are so inherently political that there is no justification for networks paying for putting on the debate and any receipt of money would be seen as prohibited contributions," he added.

Noble noted it is not clear if the federal government's election enforcement arm would even weigh in on the matter if the RNC decided to sell the broadcast rights.

"It is hard to tell what the FEC would do, because it is not very aggressive these days," said Noble.

When the idea of selling the broadcast rights was suggested at the meeting, there was neither support nor opposition to it, said the two Republicans, who both requested anonymity to speak freely about the discussion.

"I can't say I didn't do a quick blink when I first heard it," said one of the Republicans. "I did think about it later. I know where these guys are coming from. The RNC is facing a huge hole."

The other Republican described the suggestion as "pretty distasteful, I think." But the GOP political operative also acknowledged the financial peril the RNC is in after former chairman Michael Steele's rocky two-year term.

While Republicans captured the House, made gains in the Senate and picked up additional governorships during Steele's tenure, he was widely criticized for his stewardship of the committee, particularly fundraising.

"I understand where Priebus is coming from," said the Republican. "He is staring at $23 million in the face. How does he deal with it?"

At greater stake for each of the potential presidential candidates is not necessarily if the RNC is able to sell the rights to the debates, rather what is in their personal interests as they seek the nomination. Lesser known candidates are more inclined to want as many debates as possible, while the top tier is likely to be in favor of fewer nationally televised events.

Also, if the RNC sanctions the debates, the candidates and the news outlets will want to know how much influence the national committee would have over each event from invitations and questions to format and ticketing.

Noble noted that the proposal opens up the possibility for a group of deep-pocketed Republican donors to create a news website, pay the RNC a large fee for the broadcasting rights and stream the debate over the internet.

"One of the hard issues is with the broader concept of what is the media that has developed over the years," he said. "It would be very hard to draw a line (between) a news organization that pays for a debate as a news matter and another organization that just pays for it as a way to get money to a party committee."

The Democratic National Committee sanctioned their party's presidential primary debates in 2007 but did not charge the TV outlets to air the events.