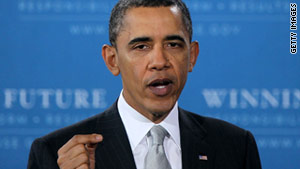 President Obama tells an audience at a Virginia school on Monday that "No Child Left Behind" needs fixing.
STORY HIGHLIGHTS
RELATED TOPICS

Washington (CNN) -- President Barack Obama called Monday for Congress to pass education reforms by the time students return to school next fall, telling a Virginia middle school that fixing problems in the Elementary and Secondary Education Act -- more commonly known as "No Child Left Behind" -- should be a top priority.

"In the 21st century, it's not enough to leave no child behind. We need to help every child get ahead," Obama said, urging Congress "to send me an education reform bill I can sign into law before the next school year begins."

Mindful of the budget debate currently enveloping Washington, Obama insisted that education funding must remain robust because it is vital to the nation's future success.

The Elementary and Secondary Education Act was originally passed in 1965 and requires periodic reauthorization. The current version of the law, which was passed on a bipartisan basis in 2002, requires states to set higher standards and to have greater accountability through standardized testing.

Education Secretary Arne Duncan issued a dire prediction Sunday afternoon during a conference call with reporters, saying that if "No Child Left Behind" isn't reformed, four out of five schools won't meet the law's standards.

"Under the current law, it's one size fits all," Duncan said. "We need to fix this law now so we can close the achievement gap."

The administration, which has been meeting with congressional leaders to hash out changes before any reauthorization vote, believes current law is too punitive and has led to a too-narrow curriculum and lower standards.

A pair of House Republicans agree.

"Although we have our different approaches, everyone agrees the current law is broken and in need of repair. The status quo is failing both students and taxpayers," Reps. John Kline, R-Minnesota, and Duncan Hunter, R-California, said in a joint statement last week.

"No one disagrees on the importance of education," Duncan said Sunday. "For the most part, we've been largely aligned with leaders on both sides of the aisle, but we need to come together and do the right thing for our children."

For Obama, that means increasing the incentive-based concept of his "Race to the Top" program that offers extra funding for states that show home-grown education reforms are improving performance.

He proposed expanding "Race to the Top" to let local school districts apply, and said reforming "No Child Left Behind" should build on the program's goals.

The president made a point of promoting the importance of teachers, calling for them to get more pay and respect as valued assets in the nation's future success. He made no mention of the new Wisconsin law that stripped some collective bargaining benefits from teachers and other public employees, but his enthusiastic promotion of teachers prompted applause and cheers of support.

Obama spoke at Kenmore Middle School in Arlington, Virginia. The arts and communications magnet school has incorporated technology in many areas of its curriculum.