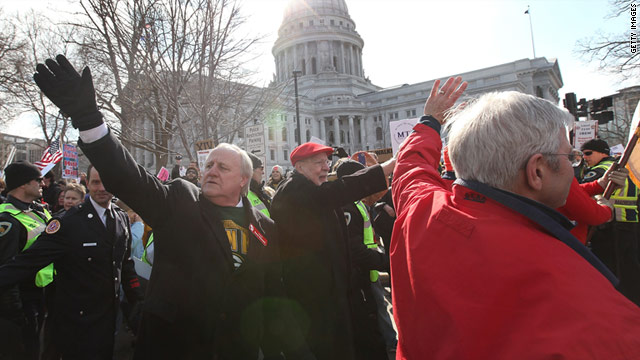 Democratic state senators greet supporters as they march around the Capitol with protesters on Saturday in Madison.
STORY HIGHLIGHTS

(CNN) -- Democratic state senators who fled Wisconsin to protest the governor's bid to curb the bargaining rights of public workers were greeted Saturday by cheering crowds and vowed to continue the fight.

"People think that this is a picnic for us. They're wrong. But I'll tell you something, we did it for the right reasons," said state Sen. Dave Hansen. "And the fight will continue. It does not end with that vote."

The senators are back in Wisconsin just one day after Gov. Scott Walker signed into law a bill that limits the bargaining rights of most state workers.

Cheering crowds turned out at the state Capitol to welcome them home.

Republicans cleared a final hurdle to the controversial proposal Thursday, passing the bill after the state's GOP-controlled Senate approved an amended version of the measure. This, despite the absence of the 14 Democratic senators who fled the state to prevent a necessary quorum of 20 votes.

"We gave them hope. But they gave us inspiration," state Sen. Spencer Coggs said about the protesters.