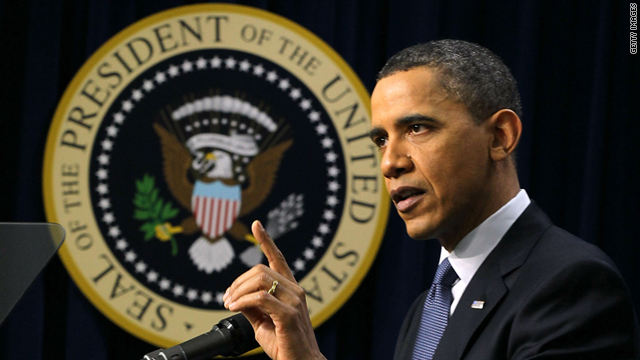 He also reiterated his threat to veto a spending measure that makes deep cuts in nonmilitary discretionary spending sought by House Republicans, saying that reducing money for Head Start teachers, Pell Grants and other education programs makes no sense.

"There are going to be certain things that House Republicans want that I will not accept," Obama said of a House bill that calls for $57 billion in cuts in current spending levels from the 12 percent of the federal budget devoted to nonmilitary discretionary funds.

The Senate rejected the House bill this week, as well as an alternate proposal from Senate Democrats that would cut $6.5 billion from current spending levels for the rest of fiscal year 2011, which ends on September 30.

Now, negotiations are focusing on a compromise that would give Republicans some of the cuts they desire while preserving programs favored by Democrats.

Last week, both chambers approved a two-week extension of the current continuing spending resolution to put off a government shutdown until March 18. That extension included $4 billion in spending cuts.

Obama said another two-week extension would probably be necessary, but he opposed any further short-term measure beyond that.

"We can't keep on running the government based on two-week extensions. That's irresponsible," Obama told reporters at the White House. He called for "serious but prudent spending cuts," but offered no specific proposals or ideas.

"Both sides are going to have to sit down and compromise on prudent cuts somewhere between what the Republicans were seeking, which has been rejected [by the Senate], and what the Democrats had agreed to," Obama added. "It shouldn¹t be that complicated."

"A government shutdown is not an option, period," Rogers said in a statement, adding: "While short term funding measures are not the preferable way to fund the government, we must maintain critical programs and services for the American people until Congress comes to a final, long-term agreement."