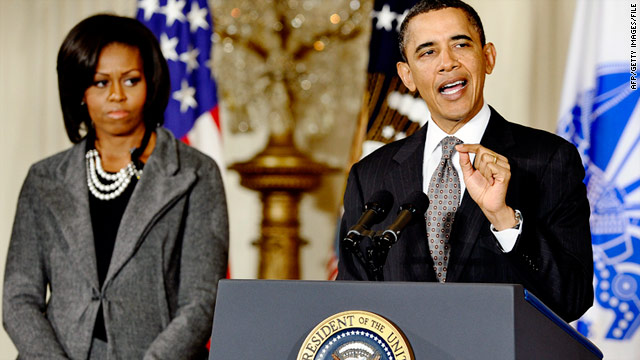 The president and first lady will host parents and students Thursday for the Conference on Bullying Prevention.
STORY HIGHLIGHTS

"If there is one goal of this conference, it is to dispel the myth that bullying is just a harmless rite of passage or an inevitable part of growing up," Obama said in a speech at the conference.

He added that there were times in his childhood where he himself was bullied.

"I have to say, with big ears and the name that I had, I was not immune. I didn't emerge unscathed," he said.

An anti-bullying PSA released online in January declares that more than six-million schoolchildren experienced bullying in the past six months. As parents of two teenage girls, the issue resonates with the president and first lady.

"I spend a lot of time talking to them about putting themselves in other people's shoes and seeing through other people's eyes," Obama said at a town hall, hosted by BET and MTV, in October 2010. "And if somebody is different from you, that's not something you criticize, that's something that you appreciate."

His comments came just weeks after a string of highly publicized suicide cases where boys as young as 13 killed themselves as a result of alleged bullying and harassment at school and over the Internet.

The suicides last fall had one thing in common, homosexuality, which catalyzed thousands of people to tape video messages -- including President Obama, celebrities, politicians -- for the "It Gets Better Project" to inspire and encourage LGBT youth who are struggling.

The conference, put on in coordination with the Department of Education and the Department of Health and Human Services, includes discussions about the effects of bullying on young people, preventing bullying and harassment in schools and the community, and cyberbullying.

President Obama and the first lady met with students and parents from the Conference on Bullying Prevention in the Oval Office on Thursday, prior to delivering remarks in the East Room.

At midday, there will be a Facebook video chat about internet safety.

The Department of Education hosted the first-ever National Bullying Summit in August 2010, and a websit, StopBullying.gov has been created.

In the administration's 2012 fiscal budget, Obama has designated $132 million to combat violence and the bullying of children, providing grants to state and local governments under the Education department's "Successful, Safe, and Healthy Students" program.

The bipartisan legislation would require schools and districts receiving designated federal funds to adopt codes of conduct specifically prohibiting bullying and harassment. The act would ensure that schools and districts implement effective prevention programs, and would require states to report data on bullying and harassment to the Department of Education.