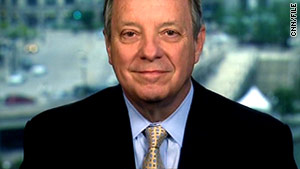 Washington (CNN) -- Amid the partisan political posturing of Sunday talk shows, indications emerged of how a congressional budget compromise might take shape even as a stop-gap deal remains elusive.

Two influential senators, Democrat Dick Durbin of Illinois and Republican John McCain of Arizona, both said any lasting solution to mounting federal deficits and debt must include more than the discretionary nonsecurity spending targeted by House Republicans.

The comments showed the negotiations may be moving from the Tea Party-fueled mantra of deep spending cuts alone to a more comprehensive approach that spreads the strategy beyond the 12% of the budget left after the government funds the military and entitlements such as Medicare and Medicaid.

Last week, both the House and Senate passed a two-week extension of the continuing resolution that funds the government until March 18. The measure included $4 billion in spending cuts.

Without another extension or agreement by March 18 on the budget for the rest of the current fiscal year, which ends on September 30, the government will shut down.

While both parties and the White House insist no one wants a shutdown, the proposals so far remain wide apart.

A bill passed by the Republican-led House would cut $61 billion in discretionary spending from current levels for what is left of fiscal year 2011. Democrats have offered an additional $6.5 billion to the $4 billion in such cuts so far.

Appearing on "Fox News Sunday," Durbin said he's open to other ways to balance the budget and tackle deficits, but not with more discretionary spending cuts than proposed so far by Democrats.

"I can tell you personally I'm willing to see more deficit reduction, but not out of domestic discretionary spending," said Durbin, the No. 2 Democrat in the Senate.

"I think we've pushed this to the limit," Durbin said. "To go any further is to push more kids out of school, to stifle the innovation which small businesses and large alike need to create more jobs. And it stops the investment of infrastructure, which kills good-paying jobs right here in the United States."

McCain, appearing on the ABC program "This Week," said a solution must go beyond spending cuts to include reforms of the Social Security, Medicare and Medicaid programs.

"Anybody who thinks we can do that with 12% to 15% of the budget or make those kinds of changes on that small a percentage of the budget is just wrong," said McCain, who generally sounds a conservative tone on fiscal issues.

While reaching such a comprehensive agreement to cover the rest of the current fiscal year is unlikely, the Senate appears intent on broadening the discussion. Votes scheduled for Tuesday are expected to defeat the House spending plan as well as the Democrats' smaller proposed cuts, setting up further negotiations while the window for a deal continues to narrow.

Democratic Sen. John Kerry of Massachusetts expressed his party's disdain for the House spending plan on Sunday, calling it "dangerous" and an "ideological, extremist, reckless" statement.

"If that were to be in fact put in place, it would contribute to the reversal of our recovery," Kerry said on the CBS program "Face the Nation," later adding: "It's not a real discussion of America's needs. We need to be doing Social Security, Medicare, Medicaid. We need to have defense spending on the table. We need a comprehensive approach."

On the same program, however, Senate Minority Leader Mitch McConnell, R-Kentucky, insisted it was the Democrats who were reckless for failing to seriously address the nation's mounting debt.

"What planet is he living on?" McConnell said of Kerry's criticism of the House spending cuts.

According to McConnell, the current situation of a divided government -- with Democrats holding the White House and a Senate majority while Republicans lead the House -- is an environment for compromise on tough issues. The problem, he said, is that Democrats so far haven't stepped forward.

Referring to the proposed spending cuts so far, McConnell said the Obama administration "has only come about one-sixth of the way where House Republicans and I and hopefully all Senate Republicans are."

Asked about private talks last week with Vice President Joe Biden that included McConnell and other congressional leaders from both parties, McConnell said he was disappointed so far.

"I don't see any willingness to do anything that's difficult," he said. "I haven't given up hope, but frankly I'm not optimistic."

McConnell and House Speaker John Boehner, R-Ohio, face pressure from within their respective caucuses to live up to spending cuts and government reduction promised in the November election campaign.

Tea Party candidates elected in the GOP takeover of the House continue to advocate even steeper cuts than have been proposed so far, and Boehner already has been criticized by a leader of the Tea Party movement for appearing open to compromise on the House plan for $61 billion in cuts.

However, the House bill also raises questions among some security-minded conservatives such as Rep. Peter King, R-New York, who told CNN's "State of the Union" he had concerns about cuts to security spending.

"I think that a number of the cuts Republicans have made ... are wrong," King said. "They cut port security by two-thirds, they cut transit security by two-thirds. That's one example right there. We cannot afford those cuts, they are too dangerous. And one attack on a subway train or one attack in one port will cost us more money going into the future years than any amount, any small amount they're saving."

Meanwhile, Tea Party favorite Rep. Michele Bachmann of Minnesota tried to open up another line of attack for Republicans on the NBC program "Meet the Press," saying that more than $100 billion in what she claimed was dedicated spending for the health care reform law in coming years must be cut before any progress can occur.

Holding up a hand-drawn white paper with the figure written on it, Bachmann repeatedly said the spending was hidden from legislators who voted on the health care bill in the previous Congress without knowing what was in it. She and other Tea Party conservatives want to repeal the health care reform law and are seeking ways to eliminate funding sources for implementing it.