Who is missing American Robert Levinson? 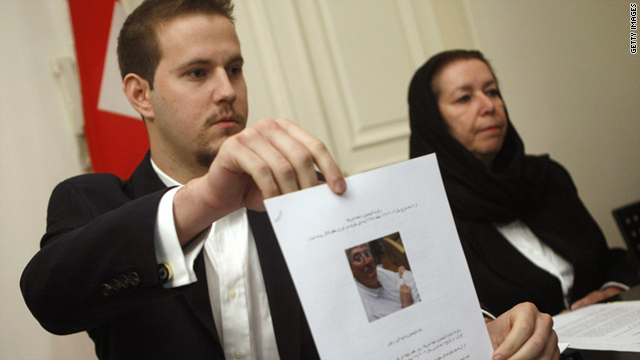 Daniel Levinson, left, shows a picture of his father, Robert Levinson, during a press conference with his mother in 2007.
STORY HIGHLIGHTS
RELATED TOPICS

Washington (CNN) -- Retired FBI agent Robert Levinson's 2007 trip to Iran would prove to be a gut-wrenching nightmare for his family.

The agent-turned-security consultant went missing on Iran's Kish Island in March of that year. He was last heard from on March 8, 2007, when he checked into a Kish Island hotel and then checked out to return to the United States the next day.

New evidence suggests that the Coral Springs, Florida, man, who has diabetes and high blood pressure, is alive and being held in Asia, according to Secretary of State Hillary Clinton.

His location has been a key issue for both the Bush and Obama administrations. Many believed the now 63-year-old was dead, though efforts to find him continued.

Levinson's family said in 2010 that he was working as a private investigator in Dubai and may have been looking into a cigarette smuggling case.

The State Department has consistently denied Levinson was working for the U.S. government and has unsuccessfully pressed Tehran for information about his whereabouts.

Iranian authorities, meanwhile, have said repeatedly that they do not know what happened to him.

"In that time, the corrupt Iranian regime hasn't given the Levinson family the most basic courtesy of saying whether Levinson is in their custody or not," Thomas Francis wrote in a September 2010 story for the Broward-Palm Beach New Times.

CNN previously reported that Levinson met with Dawud Salahuddin, an American fugitive who lives in Iran, shortly before his disappearance

Salahuddin, known in Iran as Hassan Abdulrahman, converted to Islam and was given refugee status in Iran after admitting in interviews to killing Ali Akbar Tabatabai, a former Iranian diplomat under the shah, in Maryland in 1980, he told CNN in a 2007 interview.

Salahuddin was detained by Iranian officials in plain clothes and taken to be interrogated about his Iranian passport, he said in the interview. When he was freed the next day, he said, he was told by officials that Levinson had returned to Dubai.

His story matches accounts that friends of Levinson's tell. They say Levinson feared he would be arrested after his meeting with Salahuddin.

In December 2007, Levinson's wife and other family members traveled to Iran and met with officials. Christine Levinson has said the Iranian government was polite and guaranteed her family's security on their trip but provided no details regarding her husband's whereabouts.

A year later, she flew to the United Nations to ask questions about her husband. Iranian President Mahmoud Ahmadinejad declined to meet her.

Robert Levinson retired from the agency in 1997 and was not involved in intelligence matters with the bureau, officials have said. Levinson later became a principal at the consulting firm Business Integrity International.

Christine Levinson has said, "I just think he was in the wrong place at the wrong time."

The family has offered a $5,000 reward for information leading to his safe return and maintains a website dedicated to him.

As for the latest news, Levinson said her seven children, two grandchildren and she "await the day we will be reunited."

"Our family is tremendously encouraged by the news Bob is alive but remains concerned for his safety and well being," she said in a statement Thursday.