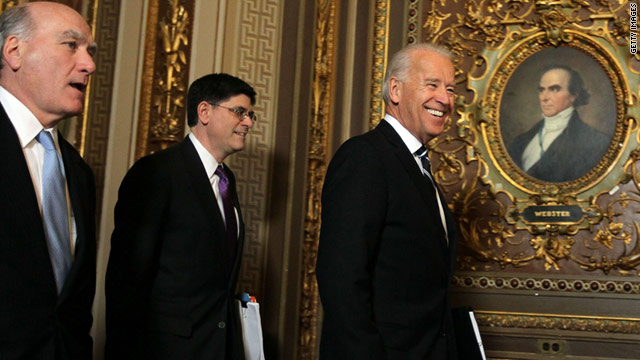 According to multiple sources familiar with the meeting, negotiators agreed to hold Senate votes on each side's position, in the hopes of demonstrating the necessity of compromise to powerful voices in both parties who have been resisting a deal.

The meeting, held in Biden's office on Capitol Hill, was prompted by congressional Democrats who implored the White House to get more involved in the battle with Republicans over spending.

A temporary funding measure enacted Wednesday will expire on March 18. At that point, there will be a government shutdown if nothing new is enacted.

Following the hourlong meeting, Biden released a one sentence statement, saying only, "We had a good meeting, and the conversation will continue."

Republican leaders in the House and Senate had been reluctant to sit down for negotiations with Democrats, saying they don't know what their position is, since the Democratic-controlled Senate has yet to pass a spending bill to fund the government for the rest of the year.

House Republicans recently passed legislation cutting spending by $61 billion this year. On Wednesday, however, Sen. Chuck Schumer, D-New York, called the package a "nonstarter," emphasizing the belief among most Democrats that its reductions in discretionary spending are too severe.

Democratic officials at the White House and Capitol Hill said they offered spending cuts adding up to $10 billion dollars as an opening negotiating gambit. The total includes $4 billion in cuts Congress already passed this week as part of a bill to keep the government running for two more weeks, and an additional $6 billion in cuts.

The list of additional cuts included $125 million for a Great Lakes restoration initiative and $105 million slated for the National Park Service.

Republicans, however, called the new proposed cuts insufficient and a "nonstarter."

Leaders on both sides are under intense pressure from within their own parties not to give ground. As a result, multiple congressional sources tell CNN negotiators agreed to hold Senate votes -- likely next week -- proving that neither side has enough support for their position to pass.

The plan, according to the sources, is to have Senate Majority Leader Harry Reid, D-Nevada, introduce Democratic legislation as soon as Friday. The bill will include the new $6 billion in proposed cuts.

Reid will hold a vote, likely next week, on that bill and the House GOP measure cutting $61 billion.

According to sources with knowledge of the talks, negotiators concluded that once the Senate demonstrates neither of those plans will pass, it will be easier to convince the wings of both parties they must find a middle ground.

White House Chief of Staff William Daley and Budget Director Jacob Lew accompanied Biden to the Capitol Thursday and were expected to sit in on the meeting. A senior Democratic source told CNN, however, that the vice president kicked all staff members out of the room -- anyone who "didn't have an election certificate."

There had been questions about whether the negotiations would go beyond government funding bill and include other politically sticky issues like raising the debt ceiling. CNN was told, however, that the discussion stayed focused on the spending measure.

Spokesmen for Republican and Democratic congressional leaders all told CNN there was an agreement in the room that Biden's short statement would be all they would say about the opening negotiating session.

CNN's Alan Silverleib and Dan Lothian contributed to this report