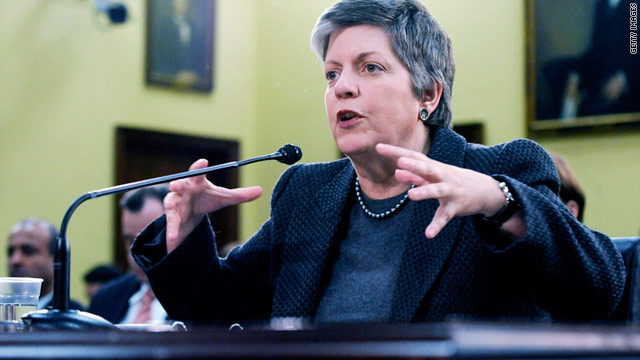 If House-approved cuts "become the basis for the FY12 budget, then I think the Congress needs to understand ... that, in all likelihood, will have a security impact," Napolitano said.

"It cuts aviation security measures. It cuts funding to sustain the progress that has been made in enforcing the nation's immigration laws. It cuts critical cyber security tools and operations. It cuts intelligence personnel. It cuts Coast Guard funding to support our war efforts abroad. And it cuts grants that support counterterrorism and disaster-response capabilities at the local level," she added.

Napolitano made her comments to a Senate appropriations subcommittee, where the budget debate echoed the fight on the national stage. Napolitano and Senate Democrats predicted cuts would harm security, while Republicans insisted spending needed to be reigned in.

"Everyone has been forced to make those hard decisions, and I think in this case the reality will probably be that there are some hard decisions that have to be made," Coats said.

Sen. Frank Lautenberg, D-New Jersey, said, "This is not a time to cut back on our homeland security. We've seen increase risk of homegrown terrorism -- the Fort Hood massacre (in Texas), the Times Square bombing attempt and the New York City subway plot.

"Are we simply cutting resources? Or are we cutting the throats of the people in our society?"

Subcommittee Chairwoman Sen. Mary Landrieu, D-Louisiana, said the Coast Guard would have to eliminate 2,400 people and reduce its ship acquisition program under the Republican proposal. It would also result in cutting 3,500 Border Patrol officers, 1,600 customs agents and 4,000 airport screeners.

"We know there are attempts to take down aircraft in America that are ongoing. We have been successful in preventing it so far. This (Obama administration) budget continues our efforts to be successful," Landrieu said.