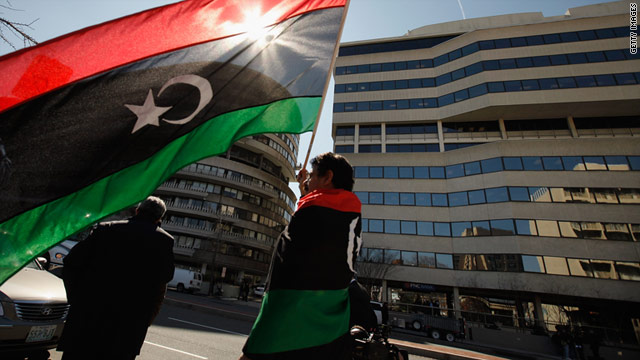 Washington (CNN) -- The Obama administration is considering whether it should cut diplomatic ties with Libya, a senior U.S. official told CNN on Tuesday.

"Whether to maintain relations or sever them is under review," the official said.

Cutting ties would send a strong message that the United States no longer considers the government of Moammar Gadhafi to be legitimate.

President Barack Obama and Secretary of State Hillary Clinton both said in recent days that Gadhafi has lost his legitimacy to rule the Libyan people and should leave power.

According to the senior U.S. official, the last high-level communication with Gadhafi's government was last week, when Clinton spoke with Libyan Foreign Minister Musa Kusa.

However, the official also said there was "still some utility" in reserving channels of communication with the Gadhafi government, noting that some American citizens remain in Libya and there could be a need to talk to Libyan officials about humanitarian activity.

"There may be instructions one has to give to Libya depending on what happens going forward," the official said.

The official added that the United States still considered Ali Aujali to be the legitimate Libyan ambassador to the United States, even after the Gadhafi regime notified Washington that Aujali no longer represented its interests.

On Monday, the State Department received a fax from the Libyan government saying Aujali was no longer the ambassador and it had named the deputy ambassador as the new "charge d'affaires," spokesman P.J. Crowley told reporters.

The senior U.S. official said the fax from Libya was not an official diplomatic note and until State Department lawyers review its authenticity, "Ambassador Aujali continues to be the head of mission at this time."

At the Libyan Embassy on Tuesday, Aujali greeted a delegation of U.S. House members led by Democratic Rep. Sheila Jackson Lee of Texas who came for a visit as a few dozen anti-Gadhafi protesters chanted on the street.

Afterwards, Jackson Lee said she and her colleagues would try to ensure that the U.S. government continues to recognize Aujali to be "the representative of the Libyan people."

She praised Aujali for condemning the Gadhafi regime, saying that, "In jeopardy of his life, he has been willing to stand with those who fight."

Aujali asked for support from the United States.

"Please stand with us to change this regime, to stop the killing of the Libyan people which is taking place every day," he said, later adding: "This regime is a brutal regime. The slogan of the regime is, 'I rule you or I kill you.' "

As Jackson Lee's delegation prepared to get in vehicles to leave, they were surrounded by demonstrators who wanted to shake their hands and hug them.

"Thank you. We stand with the people of Libya," Jackson Lee repeated over and over amid a barrage of embraces.