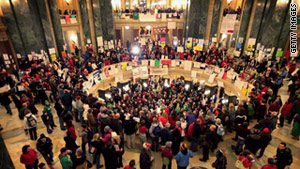 Protesters pack the rotunda of the Wisconsin Capitol in Madison on Wednesday.
STORY HIGHLIGHTS
RELATED TOPICS

(CNN) -- The fight over public union benefits and collective bargaining is spreading across the United States. Here is a state-by-state breakdown:

Thousands of people have protested a proposal in Wisconsin that would eliminate collective-bargaining rights for everything but wages. Fourteen Democratic state senators have fled to neighboring Illinois, depriving the Senate of a quorum and stalling the bill that would reduce collective-bargaining rights. Democrats say the bill is anti-union. Gov. Scott Walker, a first-term Republican, says it's necessary to get the state's fiscal house in order. He has warned that not passing the proposed bill would result in at least 1,500 government employees being laid off in the short term. The governor says it could result in 6,000 worker layoffs in the following budget cycle.

A bill to limit the collective-bargaining power of some public-sector workers has sparked protests, with crowds packing the state Capitol in Columbus for a second week. The measure, Senate Bill 5, would eliminate tenure as a consideration when making layoff decisions, require workers to pay at least 20% of their health insurance premiums and institute merit-based pay for some public-sector workers. State workers would still be able to negotiate salaries, however.

Any public employee receiving a salary funded by tax dollars -- including teachers, correctional officers and nurses -- would be banned from striking.

The Senate could vote on the measure as early as next week.

Lawmakers have scrapped a "right-to-work" bill that would have prevented private-sector unions from requiring workers to pay dues for representation. House Democrats took a page from the Wisconsin book by walking out on the Republican-supported bill.

A pending House bill would hamper the ability of teachers' unions to negotiate with local education boards concerning the terms or conditions of their service.

Lawmakers have introduced a bill that would exempt policymaking employees from the definition of a "public employee" and the right to organize and bargain collectively. State lawmakers had approved a massive tax increase, unveiling a $35.4 billion budget that relies on approving $8.7 billion in new borrowing.

Lawmakers introduced a bill that would do away with collective bargaining of pension benefits for the state's public employees. Democratic Gov. Jerry Brown had imposed a statewide hiring freeze across all government agencies.

Lawmakers have debated overturning legislation that requires an outside arbitrator to settle labor disputes involving firefighters and police officers.

Lawmakers are debating a bill that "prohibits employees of the state, any agency, authority, commission, or board of the state, or any state institution of higher education from collectively bargaining under (Iowa's) Public Employee Collective Bargaining Law."

Republican Gov. Chris Christie, who has gained a national reputation for his hard stance against public-sector employees, has argued that organized labor should have "responsible" collective-bargaining rights. Christie said he wants workers to pay more for their health care, raising their co-payments and premiums to save the state an estimated $323 million. By 2014, the governor would require them to pay for 30% of their medical benefits, up from 8% now.

CNN's David Ariosto and Alan Silverleib contributed to this report.