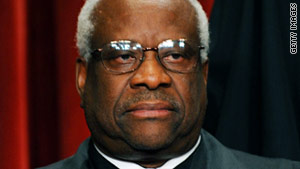 "One thing I've demonstrated ...is you can do this job without asking a single question," Justice Clarence Thomas said.
STORY HIGHLIGHTS

Washington (CNN) -- A unique anniversary at the Supreme Court passed in silence Tuesday, befitting the occasion. It has been five years to the day since Justice Clarence Thomas last spoke at oral argument, another reflection of the complex, dynamic, often misunderstood personality of the court's only African-American jurist.

The two hours of morning arguments found the 62-year-old Thomas rocking in his high-backed leather chair, often consulting legal papers in front of him. He stroked his hair a few times, looked up at the ceiling, and whispered with Justice Stephen Breyer, a close colleague despite their ideological differences.

"One thing I've demonstrated often in 16 years is you can do this job without asking a single question," he recalled in a speech three years ago. Nothing since has changed his mind, and if it has, he won't talk about it.

His "just say nothing" approach harkens back to a time many decades ago, when justices spoke very rarely at public sessions, allowing lawyers to argue their case for hours, sometimes days on end, without interruption. Arguments today are a rapid-fire question-and-answer free-for-all, with the court peppering attorneys standing before them with hypotheticals, precedents, and their own personal views on the case at hand. Thomas alone refuses to jump into the fray.

Legal blogs and various commentators have been busy the past few weeks leading up the dubious anniversary, wondering what Thomas' silence means for the court itself, in its broader decision-making process. Written opinions remain the main way the court expresses its precedent-setting power, but oral arguments can serve an important function -- helping to focus an appeal's flaws along the fringes of constitutional limits, an exercise for the benefit of the public and the justices themselves. These public sessions are often an ideal way to test often novel legal theories and to help a justice answer any lingering issues that prove decisive in the opinion-writing process to follow.

Thomas does occasionally speak from the bench, when announcing opinions he has written, but before arguments commence. Off the bench, especially in friendly audiences, the justice can be gregarious, fun, inquisitive, and often self-reflective. He has a booming voice, and his hearty laugh is easily recognizable.

"This is a person who is remarkably at peace with himself," said David Rivkin, a conservative attorney and longtime friend of Thomas, "a person who is very comfortable with himself -- probably much more so than is typical for many people in Washington, at his level of position."

Some scholars have said Thomas' aversion to talking has reached epic heights. A study of transcripts by Professor Timothy Johnson at the University of Minnesota found in the past four decades, no justice besides Thomas had failed to speak at least once during an entire 12-month term. And Thomas is going on year five.

The last time he spoke was February 22, 2006, in a capital appeal, Holmes v. South Carolina (04-1327). Near the end of the argument, Thomas offered a brief question about standards a judge can use when allowing evidence in a criminal case. The court later unanimously gave death row inmate Bobby Lee Holmes a victory.

Up until that time, the justice may have separately spoken up to a half-dozen times a term, but was never especially verbose in nearly two decades on the bench.

Most famously, he offered dramatic thoughts in a 2002 appeal dealing with a Virginia law banning cross burning. He called it a tool of hate going back a century in his native South, by the Ku Klux Klan and other racist groups.

"This was a reign of terror, and the cross was a symbol of that reign of terror," he said in his deep, deliberate bass. "It was intended to cause fear and to terrorize a population."

His autobiography goes into great detail about the racism he felt growing up in rural Georgia, and many court watchers believed his personal comments on cross burning may have clinched the case in the state's favor.

That often-troubled upbringing may explain why Thomas chooses to say so little in the one forum where the nine-member court can be seen and heard. In past remarks, he has cited shyness and a lack of confidence as a student to master standard English. He remembers growing up speaking Geechee, a unique Creole-based dialect used by African-Americans in the Low Country region from coastal South Carolina to Florida.

Friends say despite his low-key personality in formal settings, he is an articulate, engaged legal thinker who does not lack for confidence. Colleagues say he chafes at descriptions of him as "Silent Clarence."

"I can't really say that's unfair to say I'm silent in that context," he said in a C-SPAN interview in 2007. "I would like to, though be referred to as the 'listening justice.' I still believe that, if somebody else is talking, somebody should be listening."

That can be hard when colleagues like Chief Justice John Roberts, and Justices Antonin Scalia, Sonia Sotomayor, and Breyer get on a roll. They can dominate an argument with often long-winded hypotheticals, colorful outbursts and persistent probing of a lawyer's argument.

The court in the past two decades from 2008 typically asked about 133 questions per hour-long argument, according to the University of Minnesota study. In the 15 years before that about 100 questions on average were asked.

Some date the change to Scalia, who since joining the court in 1986, seems to relish his role as swashbuckling questioner, with equal parts humor and biting analysis.

"He very much changed the dynamic, becoming a very active questioner from the bench," said Paul Clement, a former Scalia law clerk and later solicitor general. "And some other justices, including justices who had been on the court for a while, were kind of like: if the new guy gets to ask all these questions, I'm going to step up and ask some questions, too. Especially as newer justices came on the court for the first time it really transformed the way the court conducts business in oral arguments."

Interrupting counsel, often before they even get a word out, can be entertaining, but often frustrating for those watching an argument. Some flustered attorneys have withered under what can seem like relentless questioning from a particularly animated justice, often Scalia.

Justice Samuel Alito had noted that during his first few months on the job in 2006 it was tough for him to get a comment in. Roberts and newest Justice Elena Kagan seemingly had no problem, even from their early days, getting into the often rollicking rhythms of oral argument. "I think you're handling these questions very well," the chief justice recently told one red-faced lawyer during a particularly heated debate.

Justice John Paul Stevens, whom Kagan replaced, four years ago lectured his benchmates, "I really would like to hear what those reasons are [from the lawyer] without interruption from all my colleagues."

Roberts, who presides over the sessions, has needed to gently act as referee on several occasions this term when justices have stepped on each other's voices in their eagerness to be heard.

As for Thomas, many wonder whether he is too disinterested, intimidated or intellectually arrogant to pose a question, to join his colleagues in the argument scrum. He has said he is not any of those, merely respectful and humble about hearing the other side. Several lawyers over the years have privately voiced frustration at not hearing from the justice more. One experienced lawyer who has argued frequently before the court told CNN that eliciting regular responses from Thomas could help her gauge what would be troubling the justice about her case, to get at least a glimpse into his legal reasoning. That is particularly true for perhaps the court's most consistently conservative justice, who is often in lone dissent. Achieving unanimity in key rulings has long been a laudable goal on an ideologically fractured bench.

Thomas has offered another explanation for his demeanor: the fact he has already made up his mind about the case before argument, when lengthy written briefs in the case have already been filed. But he put it more bluntly in 2007, in remarks clearly meant as a joke, but illustrative of his unique personal and ideological persona: "My colleagues should shut up!"