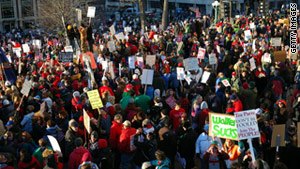 And an estimated 55,000 people turned out for Saturday rallies at the capitol.
STORY HIGHLIGHTS

(CNN) -- After six days of protests that packed the state capitol, Wisconsin's major teachers' union called on members to start returning to work Monday but keep fighting a proposed rollback of union protections for public employees.

"To educators whose contracts do not recognize Presidents' Day, we call on them to return to duty by day -- and find ways to be vocal and visible after their workday is done," Mary Bell, president of the nearly 100,000-member Wisconsin Education Association Council, told members in a statement issued Sunday afternoon. "To those whose contracts recognize Presidents' Day as a holiday, we call on them to return to Madison."

But other unions said they plan to continue demonstrations into Tuesday, and not all members of Bell's union had decided to follow her lead. Members of Madison's WEAC local, the MTI Teachers Union, have voted to remain at the capitol on Monday at least, its president, Mike Lipp, told CNN.

"I think every teacher in here wants to be back with their students, but we also understand that there are important points to be made," Madison high school teacher David Olson told CNN. "And so far, we've done a good job of using our collective action to force the issue and to make sure people understand why we're fighting. It's an important fight to continue."

Wisconsin's new Republican governor, Scott Walker, is pushing a state budget bill that would severely curtail collective bargaining for public employees. Walker says the measures are needed to head off a $3.6 billion budget shortfall by 2013 that could result in thousands of layoffs.

But the issue has triggered widespread resistance from unions, even those that won't be affected by the plan, and the 14 Democrats in the state Senate have fled Wisconsin to stall a vote on the plan.

"It is not about specific negotiation points," Matthew Kearney, a member of the Teaching Assistants Association and the University of Wisconsin-Madison, told CNN on Sunday. "It's about the existence of unions, the fact that this bill would make it impossible for public unions to exist in Wisconsin. That's what's it's designed to do, to destroy public unions."

The demonstrations caused schools districts to cancel classes in Milwaukee and Madison for much of last week as large numbers of teachers took the day off work to protest. Some teachers have been given doctors' notes to excuse their absences from physicians sympathetic to their cause, protesters told CNN.

And an estimated 55,000 people turned out for Saturday rallies at the capitol, mostly in opposition to Walker's plan. Several thousand more packed the building on Sunday, sending up a rousing cheer when a group of firefighters -- who, along with police, are exempt from Walker's proposed bill -- joined them in a show of support.

Speaking on "Fox News Sunday," Walker denied complaints that he was trying to break up public employee unions. But he said that collective bargaining has hindered local governments' efforts to manage their finances "time and time again."

"The difference is, unlike those other states, I want to give those local governments the tools they need to balance the budget now and in the future," he said. "They can't do that with the current collective bargaining laws in the state."

Walker called on the fugitive Democrats to come back home, telling them, "If you want to participate in a democracy, you've got to be in the arena." But the senators said they'll stay away unless Walker agrees to negotiations over his proposal, arguing that teachers have already agreed to pay more toward health care and pensions.

"In return, they ask only that the provisions that deny their right to collectively bargain are removed," state Senator Jon Erpenbach, a Democrat, said Saturday.

CNN's Casey Wian and Chris Welch contributed to this report